NOTE: This was originally a list only focused on Vine, but was expanded when Instagram added video-recording features

UPDATE: Twitter has announced that, though they’re shutting down Vine, they are relaunching it as a new app called Vine Camera that works the same except for the fact that there won’t be a Vine “community.” You’ll be able to save your Vines and also share them on Twitter. These abilities should work fine for education.

Vine shuts off sharing, launches Vine Camera is from TechCrunch. 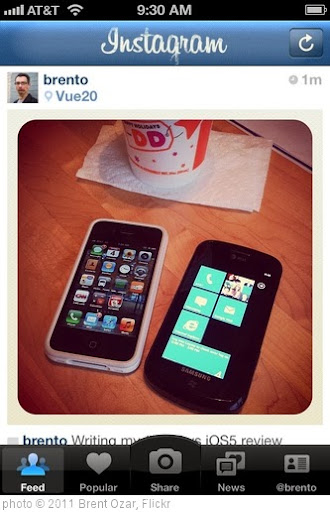 Twitter’s new video app Vine is only supposed to be used by people over the age of seventeen, so it’s not usable in K-12 classes. However, it is usable by educators communicating with other educators on social networks and, of course, by and for adult learners (or, as I do, by teachers filming the videos in their own account). Here are some useful resources on using the app, and I hope others will more — including if you have ideas on how to use it in teaching and learning:

Here’s a useful video I learned about via Joe Dale:

8 Creative Ways To Use Six Seconds On Twitter Vine is from Make Use Of.

What cognitive psychology teaches us about creating effective Vine videos is from Poynter.

4 Storytelling Tips for Making 6-Second Short Films with Vine is from The 21st Century Fluency Project.

20 Ways To Use Twitter’s Vine In Education is from The ASIDE blog.

How To Use Vine In The Classroom is from edudemic.

Vine Fights Instagram With Biggest App Update Yet is from TechCrunch.

3 Ways To Use Vine In The Project-Based Learning Classroom is from Teach Thought.

Using Vine/Instagram In The Classroom

I had my Beginning English Language Learners try it out, and it went great! We used the videos as a formative assessment to determine their understanding of new vocabulary, and they loved creating them. And it was so fast and easy! Next week, they’ll be using puppets.

We used my iPhone, and since Vine is blocked by our school internet filters, I just uploaded them to our YouTube channel (Vine’s can automatically be saved to your phone’s camera roll).

‘Vining’ the Bill of Rights: History lesson taps social media is from The PBS News Hour.

Instagram Announces Plan To Increase Videos To One Minute – Great For Teachers, Students & Everybody Else
“Guess What!” Is A Great “New” Game – Plus, ELLs Can Create A Video For An Authentic Audience

15 Second Book Talks Take 1 is from Colby Sharp. It’s about using Instagram’s new Stories tool for creating book talks. I’ve written a lot about how I use Instagram’s video feature for book talks and other projects (see The Best Resources For Learning To Use The Video Apps “Vine” & Instagram). I hadn’t paid much attention to the Stories feature because I knew it would automatically delete after twenty-four hours. But, after further investigation, I learned that it’s easy to save the videos as permanent.

Nathan Pyle shares pretty creative cartoons and videos online.  In one of his series, he has pigeons walking around having conversations.  Yes, I know it sounds weird, but it works.  You can see one of his videos here and, at the same time, he explains how he uses Instagram to create them.  I think students could use this technique, too, and not just with pigeons.

“WingClips” Could Be Very Useful — With Important Caveats

Video: “John Lewis reflects on the Freedom Rides and what he thinks about today’s protests”

Critical Past Has 57,000 Historic Videos