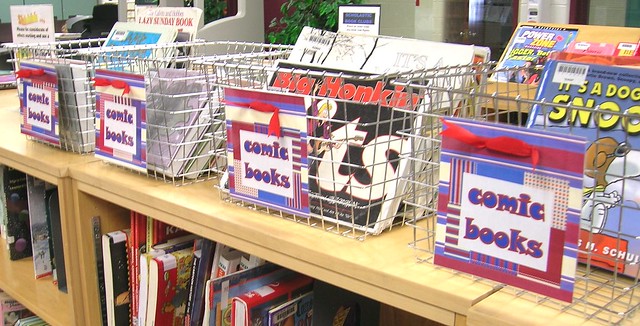 I decided to create another quick “The Best…” list today rating sites that allow you to create online comic strips.

These can be excellent opportunities for English Language Learners to be able to focus more time on developing language, writing, and storytelling skills instead of having to focus on creating drawings. Of course, I’m not denigrating the role of art in the classroom. It’s just that there are a number of online sites that make that part easier, and might make both writing and reading a little more engaging and attractive.

I’m differentiating “comic strips” from cartoons. There are many sites that let you add speech balloons to single images off the Web. You can find links to several of them at The Best Sites For Online Photo-Editing & Photo Effects.

The sites here let you tell a story in several frames.

My criteria for including a site on this list include it being free, accessible to English Language Learners, and appearing to have some monitoring of its site to help monitor content so it appears to be appropriate for classroom use. In addition, the user’s creation is hosted on the site indefinitely (I have a few links at the bottom to sites where you can create comics, but they can only be “printed out.”

I wasn’t really able to rate them in order of preference because many of them are so similar, though I do highlight a few. They can primarily be divided into two categories:

1) Ones that require no registration; are extremely simple to use; and don’t create a potential problem with inappropriate content since you pretty much don’t have access to other comic strips created on the site. The downside to this sites are they only allow you to link to the comic strip, not embed it. In other words, you can’t actually place the comic strip itself on a blog or website — just a link to the strip. In addition, most of the sites in this category generally don’t offer the same level of creativity that the next group does — most here have a smaller number of pre-set templates for the strips.

2) Ones that require registration, are more complicated (though they’re all certainly accessible to even Beginning English Language Learners with a few minutes of instruction) and have many more options for creativity. These also allow you to embed your creations in a blog or website. The potential downside (and upside — there are plenty of examples to use as models) to these sites is that there is easy access to strips created by others. The sites I’ve listed in this category seem to monitor for appropriate content, but there is always the possibility, however slim, that something might slip in. Of course, after you embed student creations on a blog or website, that dramatically reduces the possibility of their accessing other non-student creations, anyway. The risk is when they’re at the site creating them. There’s a risk in everything we do, of course, and I’ve had my students access these sites without any problem at all.

Here are picks for Category 1 (there are also others at the bottom of this post):

Make Beliefs is a fairly well-known site that has a variety of characters that can be used in pre-made templates. It’s already popular in schools — both in mainstream and ESL/EFL classes.

Write Comics is a super-simple tool to create comic strips without requiring any registration. You can learn more about it, and see samples and a video, at Ana Maria Menezes’ blog.

And now for my choices in Category 2:

I have four sites in this batch, and I have to say — in my eyes at least — it’s difficult to distinguish between them. The four are:

Pixton, a newer site that, if you make a series of comic strips, lets you put them into a virtual “book.” It also seems to have a very overt and pro-active (at least it says it does) policy on ensuring that only appropriate content remains on the site.

The final one on my list is ToonDoo. When you go to their site, at the top you see something that says “Safe Search On.” All you have to do is click on that to gain access to mature content, apparently, but I’ve done that and haven’t actually found anything inappropriate.

Creaza has a number of student tools, including ones mindmapping, moviemaking and audio recording. I’ve posted about them in the past, and wrote that I thought their apps were just a bit too complicated to be included on any of my “The Best…” lists. I took another look this past week and, though I still feel that way for most of their tools, the one for making cartoons appears to have been simplified.

The Texas Independence Convention Comic Maker is obviously pretty narrow in scope, but it’s great if you’re teaching U.S. History (the site has a nice movie, too, on Texas independence.)

20+ Tips and Resources to Engage Learners with Comics is from Shelly Terrell.

Using cartoons and comic strips is from The British Council.

After quickly registering, Marvel Comics lets you create your own comic that you can print, send, or embed.

Richard Byrne just posted about a new free and easy tool for creating a free comic – without having to even register. Read Richard’s post and check out ToonyTool.

Culture Street lets you make and save comic strips online.

Motion Comics lets you create a comic that can function like a slideshow with music, like this one.  Unfortunately, you have to upload any of the images or sound you want to use – they don’t have a “bank” you can draw from.

These next sites let you create comics. However, they don’t let you send or save them – only print them out:

You can create comics with Canva.

Another fresh batch of activities is up at my site:https://t.co/elSYH2RkBR

These are “Finish the Comic!” Comics, in which kids are tasked with using inferencing skills and their imaginations to complete incomplete comics.

I plan to post more new activities every day or two. pic.twitter.com/e1egXv4tSY

Create Your Own Digital Comics Whether You Can Draw or Not is from The NY Times.

The Best Resources For Learning About Hurricane Harvey

“Protagonize” Unveils Its Long-Awaited Feature (By Me, At Least) For Private Group Storytelling