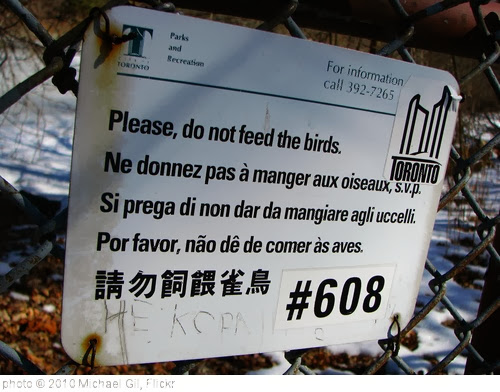 Having academic content available in the native language of English Language Learners is valuable for several reasons.

One, it’s useful for teachers who use the widely-respected and thoroughly researched teaching method called “Preview, View, Review.” In this instructional strategy, the teacher first provides students with a quick introduction to the lesson in the native language; then the lesson is given in English; and, finally, a short summary is provided in the student’s first language.

Two, it’s extraordinarily helpful in providing parents of English Language Learners accessible knowledge of what their children is being taught. This gives many parents who are not able to speak English the ability to better know what is happening in the classroom. They can talk more with their children about academic content and help them with their homework more effectively.

And, three, students can access the materials — sometimes in class or at home — so they can develop a greater understanding of the subject matter and develop more self-confidence.

Because of these reasons, I thought it would be useful to prepare a “The Best…” list of resources that I think provide the best multilingual and bilingual information about content typically taught in schools.

This list is different from The Best Multilingual & Bilingual Sites For Learning English.  There, I focused on sites that were focused on using the student’s native language as a tool to help them learn English.  Here, even though use of native language materials an be used very effectively to assist students develop their English-language skills, these sites are not explicitly designed to do so.  They have only been developed to provide content knowledge to speakers of languages other than English.

In order to make it on this list, the resource must be provided free-of-charge, with no registration required, and be relatively engaging. Even though they charge for it, I do have to at least mention Brainpop. They have good Spanish versions of their videos though, unfortunately, the selection is far fewer than the number in English.

The sites that offer multilingual information are listed first in each subject category and then are followed by bilingual (English/Spanish).  Here are my choices for The Best Multilingual & Bilingual Sites For Math, Social Studies, and Science:

I’m adding some additional resources related to math instructional videos in Spanish though, at the same time, I recognize that they might be of superior quality.

One is the Khan Academy multilingual resources. They seem to have a number of resources in multiple languages, along with a separate YouTube channel for videos in Spanish.

Much of the site is just composed of links to materials others have created. However, there is some original material that could be useful to educators, particularly videos on different types of jobs and some decent, though surprisingly shallow, videos on content covered in the GED.

Of course, as I’ve previously posted, Slim has also paid for all the Khan Academy videos to be redone in Spanish, and there’s a link to the Khan Spanish-language site, which is new to me.

The British Council has math glossaries in several different languages, including Persian.

Microsoft Math is a multilingual app that provides step-by-step instructions for math problems. It’s similar to other apps on The Best Apps, Online Tools & Other Resources For Math list. The key difference that I see, however, is that it provides multilingual support.

engageNY has tons of math lessons translated into multiple languages.

We use Big Ides, so it’s imbedded. You can access it online at https://t.co/yVoicvTxpj.

Here are math glossaries from NYU.

Legends of Learning now has versions of their science and math games in Spanish.

The Catholic Legal Immigration Network (CLINIC) has just performed a great service for recent immigrants by helping to develop and distribute the new U.S. Citizenship test questions in eleven additional languages.  The U.S. government provides translations in four major languages. CLINIC has recruited community organizations from around the country to do these eleven, and are hoping to do more.

The United States Holocaust Memorial Museum has a ton of resources in multiple languages. In order to access them, you first have to search anything you want in the search box on the home page. Then, in the upper left hand corner of the page you’ll see a link to “Site.” Click on the arrow there and you will see links to different languages. It also has many resources in Spanish.

9 iCivics Games with English Language Learners Supports is from iCivics. I’m going to try some of these out with my ELL U.S. History class.

Polk Brothers Foundation has a ton of English/Spanish materials for every subject (look on the far right column).

CNN has an excellent Spanish site.

The Smithsonian announced a number of new bilingual (English/Spanish) resources for teaching.

DePaul University, too, has a large list of bilingual resources.

A district has created  multilingual glossaries.

(I forgot to mention that Brainpop has Spanish versions of most, if not all, of their movies. Of course, you need to have a paid subscription in order to access the majority of them, but I think they’re worth the price)

Phet from the University of Colorado has many online science simulations in multiple languages.

It has lots of very accessible info about all things space-related and, with a click on the globe on the top right of the English or Spanish page, it will take you to the version in the other language.

Legends of Learning now has versions of their science and math games in Spanish.

Carolyn Zierenberg, a talented teacher at our school, put together a simple multilingual (English/Spanish/Hmong) glossary of academic vocabulary. She’s given me permission to it on this blog and website.

This Glossary of Commonly Used English Academic Vocabulary took an incredible amount of work to complete (if that link doesn’t work, you can access it here).

2Lingual is a bilingual search engine. You type in your search term and then choose two languages. Search results will show-up side-by-side in both languages. It could come in very handy for English Language Learners in content classes, as well as for their teachers who might be looking for materials in a second language that they could offer to their students for extra support. I was quite pleased with the searches I did, though I wish they had separate “tabs” for videos. They provide bilingual searches for Google and for Bing, plus a voice search capability.

Mundo from the BBC also has many resources in Spanish.

Of course, a list like this is only effective as a supplement and follow-up to multiple classroom activities where these words are used in a meaningful way in context.

Tween Tribune from The Smithsonian has accessible articles in English with Spanish versions.

Newsela, a news site for schools, has now begun to provide Spanish translations of some articles, including providing them at different reading levels. Here is their blog post announcing the feature, and here’s a link to their Spanish-language text sets.

Polk Brothers Foundation has a ton of English/Spanish materials for every subject (look on the far right column).

Edraak is a Arabic-language teaching and learning platform. It was started by the Queen of Jordan.

I recently discovered that the Khan Academy has Spanish-language science videos, as well as math. I just wish they’d get someone there who knows how to actually make engaging ones. But, nevertheless, they are very useful.

Actively Learn lets users automatically translate its materials. It just uses Google Translate, so it’s not ideal, but it could be helpful for students using its Science, English and Social Studies materials.

As usual, additional suggestions are welcome.

The Best Resources For Writing In Math Class

More On The Grimsvotn Volcano