The Best Sites For Learning About New Year Celebrations 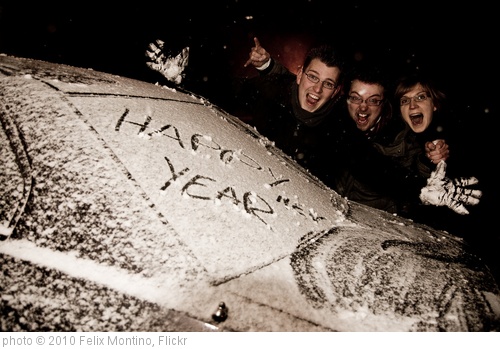 With New Year’s coming-up (at least in the calendar that many of us use), I thought a “The Best…” list would be in order (You might also be interested in The Best Ways To Help Make Your New Year’s Resolutions Succeed).

This list, though, will highlight other New Year celebrations in addition to the one traditionally celebrated in the Gregorian calendar.

Please feel free to offer any suggestions you have.  You  might also be interested in The Best Resources For Chinese New Year .

Here are my choices for The Best Sites For Learning About New Year Celebrations (and that are accessible to English Language Learners):

Fact Monster has good material at History Of The New Year.

The New York Times has a slideshow on the famous New Year’s celebration at TImes Square.

How Rosh Hashanah Works might be a little challenging for ELL’s, but it has great information that could be modified for classroom use. Rosh Hashanah is the Jewish New Year.

Chinese New Year is the simple title of a variety of listening exercises from ELLO.

A New York Times slideshow and a video on the Chinese New Year celebration.

The Boston Globe’s Big Picture has a great group of photos on Chinese New Year: Welcoming The Ox.

CBBC Newsround has images of people celebrating the New Year all around the world.

Here are some classroom materials from Lanternfish.

I’m adding Brainpop’s New Year’s Movie to this list.  You usually need a paid subscription in order to view Brainpop movies, but you can also get a free trial.  However, when I just checked out their New Year’s movie, it was available for free-of-charge.

The New York Times has an intriguing slideshow about different New Year’s “rituals” from throughout the world. The newspaper also has another slideshow highlighting celebrations, and another one focusing on Times Square.

Cleaning Up After The Party is a New York Times slideshow on…cleaning-up after the Times Square New Year’s Celebration.

I’ve gathered some materials about “Watch Night” that I’m adding to this list. Watch Night is particularly celebrated in African-American churches and commemorates when many African-Americans gathered to pray that President Abraham Lincoln would carry out his promise to sign the Emancipation Proclamation on Jan. 1, 1863.

Here is a newspaper article that gives some background on the midnight prayer services (you probably have to modify portions to make them more accessible to English Language Learners), and a slideshow from the New York Times.

Ringing In 2010, Around the World is a slideshow from the New York Times.

Welcoming 2010 is from the Big Picture.

The New Year around the world is another excellent online exercise for English Language Learners created by Renée Maufroid.

A New Year rolls in is a series of pictures from The Big Picture.

The New Year’s Eve Project: A Documentary Photo Essay is from NPR.

Ringing In 2011, Around the Globe is a NY Times slideshow.

Lucky Foods for the New Year is a useful article.

Ring in 2012, Around the World is a New York Times slideshow.

The Atlantic has a nice photo gallery of people welcoming in 2012.

ESL Holiday Lessons has a lesson on the Islamic New Year.

New Year’s Eve 2012 Celebrations Kick Off is a photo gallery from TIME.

Happy New Year, world is a photo gallery from The Boston Globe.

How the World Celebrates New Year’s Eve is a slideshow from TIME.

New Year’s Celebrations around the World is from English With Jennifer.

Watch: In Dubai, The Coolest New Year’s Eve Spectacle? is from NPR.

Dave Dodgson: A year in review. Three Quick Ideas to Start your 2015 Classes

2016 is nearly upon us! Try this new year’s resolutions lesson plan with your students: https://t.co/wI7QX5EGiU#ESLpic.twitter.com/rFNcdIMeJo

Ringing In 2016: New Year’s Traditions You Might Not Have Heard Of is from NBC News.

How countries around the world celebrate the end of the year is from Quartz.

2017: New Year’s Traditions You Might Not Have Heard Of is from NBC News.

Five Spanish New Year traditions to bring you luck for 2017 is from The Local.

The History Channel has several videos on New Year traditions and their history, including this one:

“Auld Lang Syne”: what does it mean, why do we sing it on New Year’s Eve, and what language is it? https://t.co/kXWBGXUxJQ

Persian New Year, or Nowruz, explained for non-Persians is from Vox.

New Year’s Traditions Around the World is from Voice Of America Learning English.

New Year celebrations is a lesson for ELLs from The British Council.

27 Unique New Year’s Traditions From Our Readers is from Atlas Obscura.

Lincoln moved to end slavery on New Year’s Day 1863. It went on for three more years. is from The Washington Post.

You can read more about Nowruz at CNN’s story, More than 300 million people will celebrate Nowruz (and you should, too).

This next tweet is obviously not a “celebration.” However, it’s important article that shares information that students, and teachers, should know:

Some of the world’s tastiest New Year’s good luck traditions is from The Washington Post.

For more than a century, the Sasakis have gathered in Washington State to make osechi — food that’s at the heart of Japan’s 3-day new year celebration called Oshogatsu. Their history, including internment, is the story of many Japanese in America. https://t.co/h0XFyMVnJs

8 New Year’s Celebrations From Around the World is from PBS.

7 international New Year’s Eve traditions to try at home this year is from The Washington Post.

“What, to the descendants of the enslaved, is New Year’s Eve? Watch Night argues that God has answered our prayers for liberation both spiritual and material,” writes @esaumcaulley. https://t.co/TsrSMXon6i

They eat what? New Year’s food traditions around the world is from CNN.

The Best Examples Of “Unusual” Art

The Best Online Resources For Teachers of SLIFEs