The Best Sites To Learn About Street Gangs 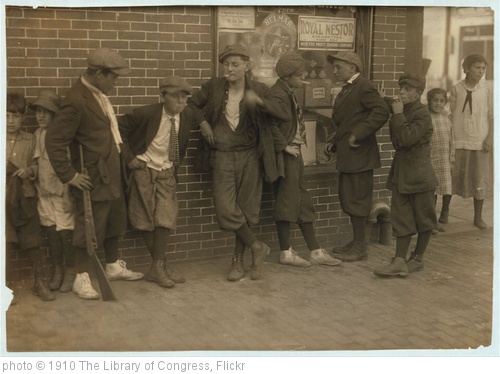 Check out my New York Times post for English Language Learners focuses on using music for language development and includes a student interactive, video, and teaching ideas. One of those ideas relates to using West Side Story to initiate a discussion of gangs.

As part of a series of lessons on writing a persuasive essay with my Intermediate English class, we’ll be reading “It Doesn’t Have To Be This Way: A Barrio Story” by Luis Rodriguez, who’s written several excellent books on gang life in Los Angeles. His books are exceptionally popular with teenage students.

I thought I’d quickly come-up with a “The Best…” list to supplement the unit — and I do mean quickly. I’m sure there’s a lot of other good work out there that’s accessible to English Language Learners that I haven’t found. I hope readers will suggest additional resources that I can add to the list.

Depending on your how your school’s content filter handles streaming media, some of these links might not be accessible.

Here are my choices, not in any order of preference, for The Best Sites To Learn About Street Gangs (and are accessible to ELL’s):

A slideshow from The New York Times is about Homeboy Industries, a Los Angeles-based organization that provides jobs to former gang members.

The San Jose Mercury News has a slideshow on the efforts of a local church to promote a gang cease fire.

In Cold Blood: Guatemala Gangs is a slideshow from National Public Radio.

Gangs Without Borders is multimedia presentation from The New York Times on Central American gangs.

An article in The New York Times is titled “Gangs Grows, But Hardline Stirs Doubts.” That article and another editorial, A Job Or A Gang, are probably not accessible to English Language Learners, but can be modified by teachers to stimulate class discussion on how best to keep young people out of gangs.

Some students from Trinity College came up with some decent ideas for simple classroom lessons and, more importantly, they include links to good resources teachers can use for developing their own.

Gangs In San Diego is another multimedia presentation.

Here’s a video on Home Boy Industries, the group that was highlighted earlier in this post in a New York Times slideshow.

I’m adding a multimedia presentation from the San Jose Mercury News on that city’s Anti-Gang Unit to this list.

The Wall Street Journal has an online video about former gang members being trained to install solar panels.

PBS’s Wide Angle series has a number of resources connected its film about gangs in El Salvador called “18 With A Bullet.” There’s a video preview of the film, a photo essay, a video update, and an overview of gangs worldwide.

Gangs In Hempstead is an onine video from The New York TImes.

Promise and Peril in South L.A. is an impressive multimedia series from LA Times on gangs and gang intervention.

Gangs On Tribal Land is a video from the New York Times sharing how “tribal officials on the Pine Ridge Oglala Sioux Reservation are struggling to control a rash of gang-related crime among native youth.”

Knocking Out Chicago Gang Violence is a CBS News video on an anti-gang boxing program.

One of the lessons — related to gangs — has students list the different groups they “belong to” family, school, etc.) In addition, I’m having them write out the different benefits they receive from belonging to each group (love, support, learing, etc.)

Next, students are researching why kids join gangs, and will then compare those reasons for joining that group with their benefits for being part of their groups. Many, though not all, of the reasons will probably be similar, and then we will explore why students think gang members might not receive those same benefits from elsewhere like our class members do.

Here are some more relatively accessible websites that I’m adding to this list that students will be using to research that particular issue:

The Lure of Guns and Gangs

The New York Times has an online video titled Streetwise Saint Joins Mexico Drug War. Here’s how they describe it:

Mexico City gang youth have adopted a first century saint as their idol. A septuagenarian American priest who speaks their language wants to cash in on their unconventional fervor to help them.

Victims of Gang Violence: The smoke clears, but pain endures is a multimedia presentation from The Los Angeles Times.

Urban Jungle on the Reservation is a slideshow from TIME Magazine.

You might also be interested in a series of “Fotobabbles” (audio-narrated photos) that our Intermediate English students did on the issue of what are the consequences of being involved in a gang.

Homegirl Cafe is a video about a young woman escaping gang life.

Blood Ties: A Photographer Captures Gang Culture In Her Family is a photo gallery from TIME.

Here’s how the filmmaker describes this short video, “Good Bread”

Bread can be considered many things: warm; delicious; sustaining. It’s also slang for money. This literal slice of life, which follows the typical day of an ex-gang member on his first job in the bakery of Homeboy Industries, underscores the meaning – and the lasting contribution – of “good bread.”

A Salvadoran Cease-Fire Holds, for Now is a New York Times slideshow.

The Washington Post has published an infographic comparing the 18th Street and Mara Salvatrucha gangs.

Searching for Hope and Humanity in L.A. is a photo gallery from The New York Times.

The Associated Press has an interactive on gangs in El Salvador.

Priest Responds To Gang Members’ ‘Lethal Absence Of Hope’ With Jobs, And Love is from NPR.

INSIDE GANG TERRITORY IN HONDURAS:‘Either They Kill Us or We Kill Them’ is from The NY Times. Modified sections could be used with ELLs.

The Best Resources For Learning About “Grit”

“A Brief History Of Women In Power”