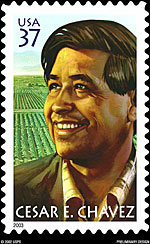 Cesar Chavez Day is recognized as a holiday by eight states in the U.S., and falls on March 31st — his birthday (or a Monday/Friday that is closest to a weekend). It is also a US federal commemorative holiday, proclaimed by President Barack Obama in 2014. Of course, it’s certainly appropriate to teach about his life at any time during the year, too. I thought I’d take this opportunity, though, to publish a “The Best…” list that might be helpful to teachers.

Here are my picks as The Best Sites For Learning About Cesar Chavez (that are accessible to English Language Learners). They aren’t in any order of preference (I’ve since added many resources about Dolores Huerta, as well):

The Library of Congress has some nice accessible features on Chavez.

The United Farm Workers Union itself has a great resource page on Chavez, including videos and E-Cards.

The California Department of Education has a Model Curriculum and Resources For Teachers on Chavez that you may find useful.

Viva la Causa is a DVD and lesson plan packet available for free from Teaching Tolerance.

The National Museum of American History has a great activity related to Chavez and the banning of the terrible short-handled hoe. Students can create their own online virtual museum exhibit.

Brainpop has a Cesar Chavez movie but, unless it’s in the free category for this month, you’ll need to either pay for a subscription or sign-up for a free trial. Generally, it appears they make it available for free during March.

A very nice new addition to this list is a proclamation issued by President Obama in 2010. Here’s an excerpt:

NOW, THEREFORE, I, BARACK OBAMA, President of the United States of America, by virtue of the authority vested in me by the Constitution and the laws of the United States, do hereby proclaim March 31, 2010, as Cesar Chavez Day. I call upon all Americans to observe this day with appropriate service, community, and education programs to honor Cesar Chavez’s enduring legacy.

Si Se Puede: Cesar Chavez’s Work Is More Relevant Than Ever is from GOOD Magazine and includes some useful links.

You might also want to see The Best Resources For Hispanic Heritage Month.

“Obama Creates Monument To Cesar Chavez: ‘He Cared'” is a CNN multimedia report on the creation of a monument to honor Cesar Chavez:

Here’s an Associated Press video report on the event:

Cesar Chavez National Historic Park is in the works is an article in today’s Los Angeles Times:

The National Park Service on Thursday announced plans to establish the Cesar Chavez National Historic Park, to recognize the achievements of the activist and the farm labor movement he led.

This is a good, short video on Cesar Chavez. It won’t be controversial in states like our which already have an official Cesar Chavez holiday. However, at its end, it does push for President Obama to declare March 31 as the Cesar Chavez National Day of Service, so teachers should use their judgement on whether to use it in class:

Jinnie Spiegler at the Anti-Defamation League has created an accessible lesson on Chavez.

What the New Cesar Chavez Film Gets Wrong About the Labor Activist is from Smithsonian Magazine.

The New Yorker has another critical take…

Farmworkers Activist Dolores Huerta Will Be Focus of Smithsonian Exhibit is from NBC News.

The Legacy of Helen Chavez is from The Atlantic.

Activist César Chaávez was born #OTD in 1927! Teach about his legacy with our free documentary ‘Viva La Causa.’ https://t.co/mMzfETfnRz pic.twitter.com/XpDY1YcNWo

In honor of #CesarChavezDay, here is a short video to remember and celebrate the labor leader and civil rights activist. ✊🏽 pic.twitter.com/PPs8F2R2W8

“There’s no turning back…We will win. We are winning because ours is a revolution of mind and heart…” – #CesarChavez #RESIST #WeFeedYou pic.twitter.com/afl3TRXWW2

Today we commemorate Cesar Chavez’s legacy by fighting for justice, opportunity, and equality for all #CesarChavezDay #1uLatino pic.twitter.com/0KYG1EBrGY

On Cesar Chavez Day, a look at the labor leader’s complex legacy is from NBC News

César Chávez’s march that changed it all is the topic of a new graphic novel https://t.co/Cq9LGPKX9l

If you found this post useful, you might want to look at previous “The Best…” lists and also consider subscribing to this blog for free

“How Parents Around the World Describe Their Children, in Charts”