The Best Sites For Teaching & Learning About Cinco de Mayo 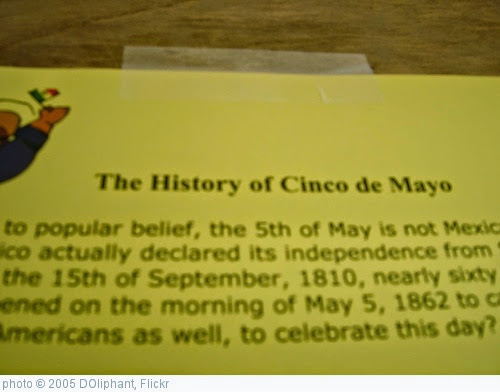 Cinco de Mayo, May 5th, commemorates the defeat of the French by the Mexican Army in 1862. It’s a holiday in some parts of Mexico, and is celebrated by Mexican immigrants and Mexican-Americans in the United States.

Finding high-interest materials for students to read, and activating prior knowledge, are both good instructional strategies, so in that spirit I offer another “The Best…” list.

All of these sites are accessible to English Language Learners.

Here are my choices for The Best Sites For Teaching & Learning About Cinco de Mayo:

The History Channel has a Cinco de Mayo feature.

This is a simple historical explanation by Social Studies for Kids.

How Stuff Works has a presentation on How Cinco de Mayo Works.

Read Write Think has a number of good resources, including lesson plans, related to the holiday.

ESL Holiday Lessons has a lesson for English Language Learners about the holiday.

Cinco De Mayo History: 7 Must-Know Facts About The Annual Celebration is a slideshow from The Huffington Post.

Remember, Remember, The Fifth Of May is a very good NY Times article on Cinco de Mayo.

Rethinking Cinco de Mayo is from The Zinn Education Project.

Cinco de Mayo a Mexican import? No, it’s as American as July 4, prof says is from CNN.

What to Really Eat on Cinco de Mayo is from Smithsonian Magazine. Gustavo Arellano, creator of the “Ask A Mexican” series, has a different perspective on Cinco de Mayo:

In pictures: Mexico celebrates Cinco de Mayo is from the BBC.

Did You Know? Cinco de Mayo Celebrates the Battle of Puebla is from Smithsonian Magazine.

Beware the annual Cinco de Mayo #FAIL is from CNN.

Cinco de Mayo, explained: how a Mexican battle cry became an American holiday is from Vox.

What Is Cinco de Mayo? is from Teaching Tolerance.

The Historically Accurate Way to Celebrate Cinco de Mayo is from TIME.

HOW TO NOT CULTURALLY APPROPRIATE CINCO DE MAYO is from 303 Magazine (thanks to Ray Salazar).

THE FORGOTTEN HISTORY OF CINCO DE MAYO: IT’S NOT ABOUT BEER, IT’S ABOUT RICH COUNTRIES STRANGLING POOR ONES is from The Intercept.

CELEBRATING THE HISTORY BEHIND CINCO DE MAYO is a short and accessible text from The Smithsonian.

Before You Celebrate Cinco de Mayo in the Classroom … is from We Are Teachers.

What Is Cinco de Mayo? is from The New York Times.

#CincoDeMayo is supposed to celebrate Mexican heritage, but it has been hijacked into another excuse to party, eat, and drink while getting sweet discounts at some restaurants. https://t.co/vcFj3eDz9a

If you’re celebrating #CincodeMayo, please be informed while doing it.
And skip out on the tacky mustache & obnoxious sombreros.pic.twitter.com/46L59fTUiN

“A Guide For Advisors Of Undocumented Students”