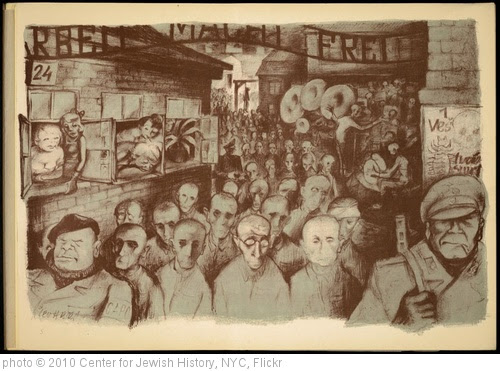 I thought I’d quickly put together a “The Best…” list of sites I’ve used with my students to help them learn about the Holocaust.

Here are my choices for The Best Sites For Learning About The Holocaust (and are accessible to English Language Learners):

Holocaust Remembrance Day is actually recognized internationally on January 27th. Here is a Breaking News English lesson that provides audio support for the text on that day.

That lesson, designed for English Language Learners, is followed by an online exercise.

The United States Memorial Holocaust Museum has many resources.  You can find all their online exhibitions here.

The History Channel has an excellent site on the Holocaust.

Brainpop has two good movies –one on the Holocaust and the other on Anne Frank.  Unfortunately, you have to purchase a subscription to view them, but they do offer a free trial.

Here are some materials on non-Jews who risked their lives to save Jews from the Holocaust:

The Teachers Guide to the Holocaust has materials on many “rescuers.”

I’ve also shown clips from movies portraying Jewish resistance to the Holocaust. Here are some Youtube links to them, though I’d encourage you to get the movies and show lengthier segments:

Also, David Truss left a comment to both share a post from his blog reflecting on his visit to the Holocaust Museum in Israel, and to suggest a poem be added to this list:

“In Germany, they came first for the Communists, And I didn’t speak up because I wasn’t a Communist;

And then they came for the Jews, And I didn’t speak up because I wasn’t a Jew;

The New York Times Learning Network also has several good lessons on the Holocaust, as does Teaching Tolerance.

Acts of Remembrance: Reflecting on How the Holocaust Is Taught comes from The New York Times Learning Network.

Documentary seeks to explain why Albanians saved Jews in Holocaust is from CNN.

The Guardian recently published Stories from Terezín: the Nazi transit camp with a musical legacy – interactive. Here’s how they describe it:

During the second world war, great composers were imprisoned at the Terezín concentration camp near Prague. They were permitted to perform and compose music – before being sent to their deaths in the gas chambers at Auschwitz. Their efforts were exploited by the Nazis for propaganda purposes, but the legacy of the compositions created and played at Terezín lives on. As London’s Nash Ensemble prepares to take a performance of the Czech composers’ work home to Prague, Ed Vulliamy has spoken to some of the camp’s survivors.

Use the navigation arrows and the menu at the bottom of the interactive to read their stories, watch videos and hear some of the music composed by the people of Terezín.

iWitness is a pretty amazing multimedia resource on The Holocaust.

Holocaust: We Are Witness is from the Sun-Sentinel newspaper.

Here’s how it describes its theme:

Millions of ordinary people witnessed the crimes of the Holocaust—in the countryside and city squares, in stores and schools, in homes and workplaces. Across Europe, the Nazis found countless willing helpers who collaborated or were complicit in their crimes. What motives and pressures led so many individuals to abandon their fellow human beings? Why did others make the choice to help?

You can also read more about it at an extensive Education Week article.

The Washington Post has published a very ambitious feature, including video and an infographic, to mark the 70th Anniversary of the liberation of Auschwitz.

Auschwitz survivor: Being alive is best ‘revenge’ http://t.co/kmDZayGvS2 via @usatoday

Read these searing quotes from an Auschwitz survivor’s essay on life in the camp http://t.co/f7D1D9mEOk

“We commemorate all of the victims of the Holocaust, pledging never to forget” —Obama #HolocaustRemembranceDay pic.twitter.com/WKw0dAbrzt

Never too young to remember – International Holocaust Remembrance Day is from The Travelling Teachers, and is a lesson plan for ELLs.

Here’s an amazing video that was made into a TED-ED lesson:

You’ll want to watch this PBS News Hour segment titled “Seeing Holocaust survivors’ stories in the books they left behind.”

Facing History’s multimedia unit on The Holocaust is quite impressive.

Teaching the Holocaust: Facts, Emotions, Morality is from Middleweb.

Digital technology offers new ways to teach lessons from the Holocaust is from The Conversation.

Thanks to Melanie Bean, I learned about an impressive interactive timeline of the Holocaust, accompanied by teaching materials. It’s from Echoes and Reflections, an education organization sponsored by the ADL and USC Shoah Foundation, along with others.

What If A Girl In The Holocaust Had Instagram (also called Eva Stories) is an amazing Instagram story that dramatizes the actual diary account of Eva Heyman, a teenager who perished in the Holocaust. I learned about it from Julia Jee, and from The New York Times article, A Holocaust Story for the Social Media Generation. What Social Studies teacher will not use it in class?

Americans and the Holocaust: The Refugee Crisis is from Facing History.

5 websites to help educate about the horrors of the Holocaust is from The Conversation.

Holocaust survivors launch new campaign to show how ‘it started with words’ is from NBC News. Here’s the direct link to the site.

Getting Started Guide for Teachers for teaching about The Holocaust is from The United States Holocaust Memorial Museum.

The Importance of Teaching About the Holocaust is from Edutopia.

Genocide In The Congo