The Best Sites To Learn About Robots 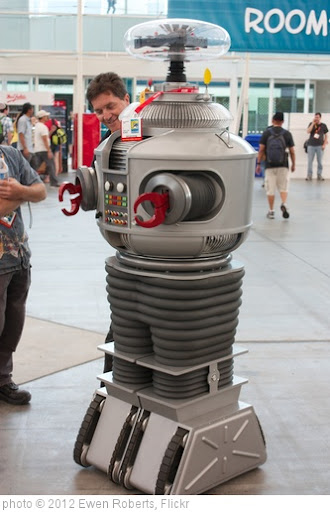 I’ve found that students of all ages are interested in robots. Given that interest, I thought it would be a good idea to bring together a number of resources about them that are accessible to English Language Learners. They make for high interest reading material, and provide good images to write about, too. The videos provide good listening practice.

Here are my choices for The Best Sites To Learn About Robots:

The Boston Globe’s Big Picture has a nice series of photos of Robots.

The Big Picture also has another series of similar images called More Robots.

Robots, part III is from The Boston Globe’s Big Picture, and is a series of images of…robots.

Robot menagerie is a slideshow from the BBC.

How Stuff Works has a ton of videos on robots.

Here are several more robot resources from the BBC:

Bonding With Paro is a video from The New York Times about how robots are providing companionship to residents of a senior community.

Students, Meet Your New Teacher, Mr. Robot is an article and video from The New York Times about the development of teaching robots. The article would be challenging for ELL’s, but the video is accessible, It could be a great source of discussion in the classroom.

Interview With A Robot is the title of a New York Times video where a reporter intervews a disembodied head of a robot.

The Emotional Robot is a video about a…robot developed to show emotions.

NASA’s sending up a “robotic astronaut” with the space shuttle Discovery, and a Florida newspaper has a nice infographic showing what it is.

Welcome to the Machines: Designing Useful Robots is a lesson plan, including multimedia resources, from The New York Times Learning Network. The lesson plan could be modified for ELL’s.

Giving Robots the Heavy Lifting is a slideshow from The New York Times.

Robots At Work and Play is the title of a series of photos from The Atlantic.

A Zoo’s Worth of Robotic Animals is an amazing collection of videos from The Atlantic.

Video: Meet Kong And Wu, The Ping Pong Playing Robots From China is a video and article.

10 Favorite Robots From the Movies and Real Life is from The Atlantic.

Here’s a video of a “Gumby”-like robot, and you can read more about it here.

The US Defense Advanced Research Projects Agency just announced their robot just set a speed record for a legged-robot — 18 mph. You can read more about it here at the BBC, and you can see it in action in the video below.

Check out this jumping robot:

Here’s something you don’t see everyday — a bicycle riding robot:

Check out this “Camouflage robot.”:

Robots At Work and Play is a slideshow from The Atlantic.

Meet a robot that is designed to go “anywhere”:

Making Robots More Like Us appeared in The NY Times.

Robots exhibition at the Science Museum, London – in pictures is from The Guardian.

Robots at Work and Play is a photo gallery from The Atlantic.

Robots at Work and Play is a  photo gallery from The Atlantic – with the same title.

Always backflipping, jumping and dancing in these clips. Never smashing, crushing, chasing, menacing, beating or arresting. By the time they start showing us videos of the police or prison guard models it will be too late. https://t.co/83FZP4kLSF