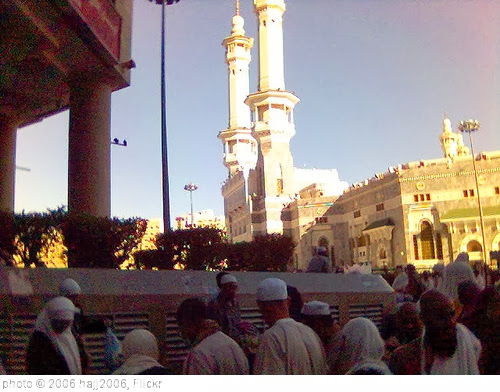 Millions of Muslims make the annual pilgrimage, called the Hajj,  to Mecca in Saudi Arabia.  Because the Islamic calendar is a lunar calendar based on the motion of the moon, the time of the Hajj is different time each year in terms of the Gregorian calendar.

I thought it would helpful to create a “The Best…” list about the Hajj.

As usual, I’m only listing sites that are accessible to English Language Learners.

You might also find The Best Websites To Learn About Various Religions & English helpful.

Here are my picks for The Best Sites To Learn And Teach About The Hajj ( not in order of preference):

Channel 4 in the UK also has a good site on the Hajj, including a “virtual Hajj.”

The Hajj and Eid al-Adha is a series of excellent photos and accessible captions from The Boston Globe’s Big Picture.

CBBC Newsround has a simple explanation.

Breaking News English has an online lesson on the Hajj for English Language Learners.

Hajj 2010 is a series of photos from The Boston Globe’s Big Picture.

Hajj pilgrims close in on Mecca is a slideshow from The Guardian.

In pictures: Hajj pilgrimage comes from the BBC.

The Hajj and Eid al-Adha is a photo gallery from The Boston Globe.

The Hajj and Eid al-Adha 2011 is a photo gallery from The Atlantic.

Hajj 2012, A Sacred Journey is a photo gallery from The Atlantic.

What Muslims Do on Hajj, and Why is from The New York Times.

Hajj, the Islamic pilgrimage to Mecca, explained for non-Muslims is from Vox.

Q&A: The hajj pilgrimage and its significance in Islam is from The Associated Press.

Flying to Hajj is an interactive from Al Jazeera.

Hajj 2019: An in-depth look at the sacred journey is an interactive from Al Jazeera.

Inside the sacred Hajj pilgrimage is an interactive.

The Best Sites For Learning About Volcanoes