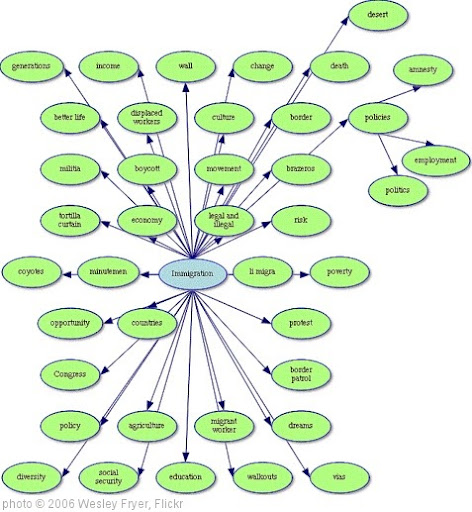 The Best Resources For Learning About Proposed Changes To U.S. “Legal” Immigration Policy

You might want to also check-out the newest Immigration section on my U.S. History Class blog.

Here are my choices for The Best Sites For Learning About Immigration In The United States (and are accessible to English Language Learners):

First, I should mention that I havea post filled with immigration resources on my United States History class blog: Starting A New Life In America

CBS News has an Immigration Interactive that is a bit outdated, but still has a lot of good information.

Here’s another immigration timeline, this time from PBS.

Scholastic has a number of accessible resources on immigration.

“Immigrant Conversations” is a neat interactive from The New York Times where readers, after logging-in, can leave comments about specific aspects of the immigrant debate. It’s much more interesting than that simple description, and is worth a look.

Immigration Slowdown is an interactive infographic from the Wall Street Journal. Here’s the description in its own words:

New U.S. Census data reveal that the number of foreign-born residents of the U.S. declined for the first time since at least 1970. See how the foreign-born population has changed in each state in the map.

The New York Times has a good graphic comparing information on undocumented and documented immigrants, including educational attainment and types of jobs.

The New York Times has published the Immigration Explorer. It shows — by geography and time period — where immigrants from various countries have settled in the United States over the past 130 years.

From Ellis Island To Orchard Street is a simulation from the Tenement Museum in New York City. In the online interactive, users play the role of an early immigrant to the United States.

Who Is Coming to America? is another graphic from GOOD.

Immigration To The United States

Immigration and Naturalization is an interactive from CBS News.

The New York Times just published a very good interactive on immigration. It’s a timeline showing the major issues related to immigration reform that have occurred since 2004. They are short “snippets” with images. You can also see editorial responses from The Times for each event.

Immigrant Conversations is a neat New York Times interactive that lets you leave comments (without having to register, it appears) on various elements of the immigration debate — education, Arizona’s law, border protection, immigration reform, etc.

I’m glad I found the interactive, but I was very disturbed the the article that accompanied it. It is how the Obama administration is stepping-up efforts to get undocumented immigrants fired from jobs — before a bill is passed that would give them a path towards citizenship.

Original Republicans Were Cool With Anchor Babies (from Miller-McCune) is, by far, the best piece I have seen on the ridiculous idea of removing the right of birthright citizenship from undocumented families. It would need to be modified to be accessible to ELL’s.

A new report has just been issued by the Center For American Progress. It’s called “Assimilation “

Here’s how Citizenship News describes it:

The Center for American Progress has put out a report on immigrant trends related to several accepted benchmarks of assimilation: attainment of citizenship, home ownership, English language proficiency, job status, and income.

Here are some highlights:

Immigrants, whether from higher or lower starting points of social and economic attainment, have been integrating at high rates since 1990.

Naturalization has increased …at a fast rate, from below 10 percent in 1990 to 56 percent by 2008, a substantial achievement given the constraints of federal citizenship law…

The Los Angeles Times has a series of good photos related to crossing the U.S./Mexico border.

10 Myths About Immigration is a nice short piece from Teaching Tolerance.

People Movin is a fascinating interactive infographic on world migration trends. Even though it’s not exclusively about the United States, I’m still adding it to this list.

Immigration Stories of Yesterday and is an interactive timeline from Scholastic.

The Beneficial Impact Of Immigrants

Immigration, The Gold Mountain And A Wedding Photo is from NPR.

Picturing the Remnants of Anti-Chinese Violence is from The New York Times.

Refugee Hotel: Strangers in a Strange Land is a photo gallery from TIME.

The changing state of US ethnicity is an excellent animated infographic from The BBC.

Pathways to America: Teaching About Immigration Changes is a very thorough lesson plan from The New York Times Learning Network.

Text to Text | ‘Enrique’s Journey’ and ‘In Trek North, First Lure Is Mexico’s Other Line’ is from The New York Times Learning Network.

Migrant Trail is a game from PBS. Here’s how they describe it:

Through the use of real-time resource management and by integrating characters, stories, and visuals from the film, The Undocumented, with intense gameplay choices, The Migrant Trail gives players another way to experience and understand the human toll of our border policies.

From Germany to Mexico: How America’s source of immigrants has changed over a century shows some interesting maps from The Pew Center. Here it is as a GIF:

Welcome.us invites people to share their immigration stories and to celebrate June as Immigrant Heritage Month:

US Immigration: Why did they move to America? is a nice lesson for English Language Learners. It’s from Absolute English.

3 maps that explain America is from Vox. Two of the are pretty interesting and regard immigration.

How to Talk About America’s Newest Arrivals is from The New York Times.

Children of Immigrants is a slideshow from The New York Times.

Which States Make Life Easier or Harder for Illegal Immigrants is an interactive from The New York Times.

The Pew Research Center released a big report on immigration to the United States.

Here are news reports (with lots of charts) on it:

Share of Immigrants in U.S. Nears Highs of Early 20th Century, Report Finds is from The New York Times.

The Changing Face of America is from The Atlantic.

In 50 years, most immigrants won’t be Hispanic is from The Washington Post.

This great map lets you explore the history of migration for every country in the world is from The Independent.

160 years of US immigration trends, mapped is from Vox.

I think the one of “Foreign-Born Population” is particularly useful, and I’m adding a direct link to it here.

There are a lot of pretty cool interactives on this list. And Vox has just created a new one: Watch how immigration in America has changed since 1820. The title is self-explanatory.

Statistic Of The Day: Immigrants More “Law-Abiding” Than Natives

The Future Of The U.S. Immigrant Population, In 1 Graphic is from NPR.

The Consequences: A Look Behind The Claims On Immigration is from Five Thirty Eight.

Here’s how little Americans really know about immigration is from The Washington Post.

DIVIDED AMERICA: The evolving face of US immigration is from The Associated Press.

America has always been hostile to immigrants is from The Washington Post.

A history of American anti-immigrant bias, starting with Benjamin Franklin’s hatred of the Germans is from Quartz.

We are a nation of immigrants and refugees. Yet we always fear who is coming next. is from Slate.
A Brief History of America’s ‘Love-Hate Relationship’ With Immigration is from The Atlantic.

Reader Idea | Building Community Through Shared Immigration Stories is from The New York Times Learning Network. It shares a fairly common lesson, but I’m sure some are not familiar with it.

What “chain migration” really means — and why Donald Trump hates it so much is from Vox.

How U.S. immigration has changed is from The Washington Post.

Why do people come to the US? is from USA Facts.

The Myth of the Criminal Immigrant is from The New York Times.

Statistic Of The Day: People In The U.S. Support Immigration

Migration is going to get bigger in the future. How will that affect the politics of rich countries? https://t.co/iVqZCE0DuY pic.twitter.com/HZNnv45hN6

Immigration in the United States visualized as rings of tree trunk

Migrants Are on the Rise Around the World, and Myths About Them Are Shaping Attitudes is from The NY Times.

Photographs That Humanize the Immigration Debate is from The NY Times.

Triumph and Tragedy: American Immigrant Experiences is from The Smithsonian.

A New Way of Seeing 200 Years of American Immigration is from City Lab.

The United States has more immigrants than any other country in the world. Today, more than 40 million people living in the U.S. were born in another country. Here are answers to some key questions about the U.S. immigrant population. https://t.co/DGvW6KQkzF pic.twitter.com/j21xLmQKPC

Infographic: Ten Things You Probably Didn’t Know About Immigrants is from The National Academies of Science.

A clarifying and compassionate @haleybureau story, definitely read this https://t.co/H37vqEAnxp

Key findings about U.S. immigrants is from The Pew Research Center. I’m adding it to The Best Sites For Learning About Immigration In The United States.

Migration Waves is a uniquely-designed infographic appearing in The National Geographic.

How Italians Became ‘White’ appeared in the NY Times.

From Here To Home: Five Films About Immigration and Belonging is from The NY Times.

Explore 100 Years of Immigration History With The Times Archive is from The NY Times Learning Network.

What the American dream looks like for immigrants is from Vox.

Infographic Of The Week: “Foreign Born in the US”

Infographic: ” Mapped: Immigration by Country, as a Percentage of the Population”

Where International Communities Cluster is an interactive created by The Pudding that shows where in the U.S. different immigrant communities tend to settle.

“Race To Ratify” Is A New Online U.S. History Game