The Best Sites For Learning About Flag Day 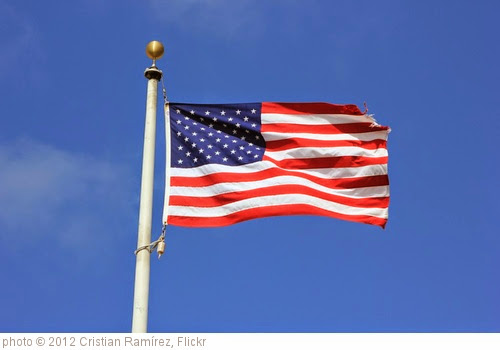 Today is celebrated as Flag Day in the United States. To quote from Wikipedia:

You might also be interested in The Best Resources For Teaching & Learning About The Protests That Are NOT Against The National Anthem.

Here are my choices for The Best Sites For Learning About Flag Day (and are accessible to English Language Learners):

After having a surprisingly unattractive website on the Star Spangled Banner for years, the Smithsonsian Institution unveiled a new one last year. It’s called…The Star Spangled Banner. The new site coincides with the opening of a new physical gallery about the flag. The site is much more accessible to English Language Learners than the previous one. There’s relatively simple text, it talks both about the War of 1812 and the flag, and there’s a good quiz and a feature where you can interact with the flag itself.

Flag Day 2011: Which Star Is Your State? is an interactive from The Huffington Post.

Giving Old Glory its final due is a Washington Post slideshow.

Five myths about the American flag comes from The Washington Post.

This video shows all the variations of the U.S. Flag during the country’s history.

Here’s a History Of The American Flag interactive.

One Country! One Language! One Flag! is a great Flag Day (it’s today) learning activity by Bill Bigelow at The Zinn Education Project. I doubt that you’ll find any better lesson out there…

Learn about the Star-Spangled Banner from The Smithsonian.

For Flag Day, watch how much the American flag has changed is from Vox.

Happy Flag Day. But Are You Flying It Wrong? is from The NY Times.

My latest! “My time in Philadelphia taught me that the flag is indeed a symbol, one that poses questions as old as the nation itself: For whom does it wave? Does it wave for me?” https://t.co/X4cIK2kDk5

The Best Videos & Articles About The Arizona and Colorado Teacher Walkouts

Four New Resources For Learning About The World’s Cultures