The Best Sites For Learning About The History Of Technology 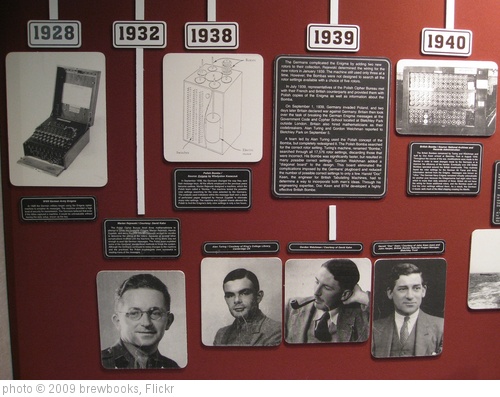 I had included some links about computer history on The Best Eleven Websites For Students To Learn About Computers, but some new related links have recently been published. So I’ve decided to make topic its very own list, and expanded it beyond just computers.

Here are my choices for The Best Sites For Learning About The History of Technology (and are accessible to English Language Learners):

TIME Magazine has come out with a nice slideshow titled A Brief History of The Computer.

An Illustrated History of Computers is much more complete, but isn’t as accessible to ELL’s as the TIME slideshow.

A Modern History of Communication is a new infographic developed by Google.

PBS has an interactive timeline on technology developed from 1750 to 1990.

The Wall Street Journal has an interactive on how 3-D Technology Came To Be.

The New York Times has an interactive timeline on the development of artificial intelligence.

And The Wall Street Journal has an amusing, and fast-paced, video describing the the history of the book, too.

The History of Location Technology is a surprisingly neat infographic from Mashable.

A gadget’s life: From gee-whiz to junk is a Washington Post infographic show the “arc” of how modern gadgets have gone from being introduced, to being popular, to becoming obsolete. It also shows how their prices varied during that time. I think it’s slightly confusing, but I’m still going to add it to list.

Failed Tech Predictions (And Some That Came Close) is an intriguing infographic.

The Development of the Camera: From Ancient to Instant is an infographic from Mashable.

Archive Gallery: Personal Computers is a slideshow from Popular Science.

Revolution: The First 2000 Years of Computing is a presentation from the Computer History Museum.

Educational Technology Through The Years is a slideshow from David Deubelbeiss.

doesn’t quite fit into “The Best” list, but it’s so amazing that it had go to somewhere: Timeline of Systematic Data and the Development of Computable Knowledge.

A Before-Its-Time Machine is a diagram from The New York Times of the “first” computer design — “Researchers are planning to build a working version of the Analytical Engine, which Charles Babbage conceived of in the 1830s but never completed.” You can read more about the project here.

Check out the Museum of Obsolete Objects.

11 Sounds That Your Kids Have Probably Never Heard is a great post from Mental Floss.

7 early videos of now-everyday technology is from The Mother Nature Network.

Predicting the Future of Computing is a really neat New York Times timeline.

Ten tech items you won’t be needing anymore is a slideshow from The Los Angeles Times.

Tech Has Saved the Postal Service for 200 Years—, It Won’t is an intriguing slideshow.

Timeline: A History Of Touch-Screen Technology comes from NPR.

The Associated Press has an interactive showing the history of the Kodak company.

The History Of Radio is an infographic.

The Antikythera Mechanism: The Story of Humanity’s Oldest Analog Computer, circa 150 B.C. is from Brain Pickings.

The New York Times has a nice infographic showing the history of innovation at Bell Labs.

Check out 1969 video that imagined the Internet:

The E-Reader of 1935 is a fun illustration from The Atlantic.

Evolution of Classroom Technology is from Larry Cuban’s blog.

Guess What’s the Fastest-Adopted Gadget of the Last 50 Years is from The Atlantic.

The 100-Year March of Technology in 1 Graph is also from The Atlantic.

The Fiction To Reality Timeline is a pretty interesting infographic.

When we dreamed of television is from The Verge.

The National Geographic Channel has begun a show on technology called The Link. Here is how Wired describes it:

In our forward-thinking world, we tend to think that ancient technology is, well, ancient. But all of our modern innovations rely on advancements made long ago, sometimes thousands of years in the past…. [it] explores the connections between old technology and new. The show will look at how innovations in one field — such as science, art, finance, or medicine – jump to others.

You can see lots of videos from the show at the site itself. Here’s an example:

Predictions for Educational TV in the 1930s is from The Smithsonian.

How Headphones Changed the World is from The Atlantic.

The Museum of Endangered Sounds is a cool and fun site.

Pushing All Our Buttons is a New York Times piece on the history of the television remote control.

The Mechanics and Meaning of That Ol’ Dial-Up Modem Sound is from The Atlantic.

Computers – Queen’s Diamond Jubilee: Technology then and now – 60 years in pictures is a slideshow from The Telegraph.

Day In Tech is a regular Wired feature highlighting important moments in the history of technology.

Oldest Sound Recording Resurrected from Paper is a short Reuters video about how a scientist digitized a picture of “record” that appeared in a 1890 German magazine and was able to play what was recorded on it:The Evolution Of The Web is a pretty wild interactive showing the history of web browsers.

A History of the Remote Control is from Slate.

The Story Behind the First Photograph Ever Posted on the Web is from The Atlantic.

Read Write Web unearthed 1995 one minute PSA produced by a fifth-grade class that had amazing accuracy in its predictions for the Internet:

techPresident’s “Politics and the Internet” Timeline is pretty intriguing interactive.

Iconic Electronics is a neat interactive of…iconic electronics over the years.

“8 Milestones In Recorded Sound” is a pretty intriguing video:

A Brief History Of Computers That Changed The World is from Make Use Of.

In pictures: The household gadgets of yesterday is from The BBC.

Framing the School Technology Dream is by Larry Cuban.

Over The Centuries: A Technology Timeline infographic by Webrevolve.

15 real modern technologies predicted by Inspector Gadget is a fun slideshow from MSN.

15 Technologies That Were Supposed To Change Education Forever is from Gizmodo.

History Of Tech In The Classroom is an interactive timeline from Learning Curve.

From Apple II to Touchcast, the evolution of computers in the classroom is from The Washington Post.

The Evolution Of Learning Technologies is an interactive from Open Colleges.

WHAT ‘TECH WORLD’ DID YOU GROW UP IN? is a neat Washington Post interactive.

100 Years of “New Technologies”: Teaching a Foreign Language with Technology from 1918 to 2018 is from Emerging Ed Tech.