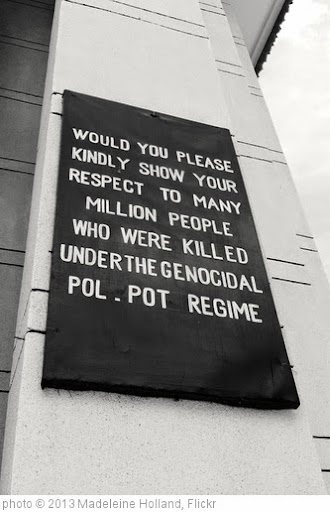 With the verdict by the United Nations tribunal investigating genocide in Cambodia, I thought it would be timely for me to both collect several previously-posted “The Best…” lists related to genocide, and to add additional links to events not covered in them.

First, here are links to existing “The Best…” lists:

The Best Resources For Learning About The Warsaw Uprising

The Best Sites To Learn About Anne Frank

The Holocaust Museum also has a good feature on Preventing Genocide . It includes sections on “What Is Genocide?” and a “Pledge Wall.”

When Native Americans Were Slaughtered in the Name of ‘Civilization’ is from The History Channel.

Facing History has many genocide-related teaching resources, including the examples I’ve already cited and others such as the tragedies in Armenia and Bosnia.

Speak Truth To Power is a project of the Robert F. Kennedy Center for Justice and Human Rights that includes a curriculum of seventeen lessons. The lessons include ones on genocide and human trafficking. They would have to be modified for English Language Learners, but they look useful. They include videos but, unfortunately, they’re all on YouTube, which make them inaccessible (online, at least) for most students).

Suspected war criminal Ratko Mladic was recently arrested. He is accused of being responsible for committing horrific war crimes against Bosnian Muslims. His crimes may, or may not, exactly fit the definition of “genocide,” but they’re close enough.

Here’s a lesson on his arrest for English Language Learners.

The Hunt For Ratko Mladic is an interactive timeline from The New York Times.

Bosnian Serb war fugitive Ratko Mladic captured is a series of photos from The Big Picture.

Here’s a video from The New York Times:

Al Jazeera World – Women who refuse to die is a video about the 1995 Srebrenica massacre of Muslims:

Rios Montt Guilty of Genocide and Crimes Against Humanity is from The PBS News Hour.

Guatemala: Why We Cannot Turn Away is also from The News Hour.

“Granito: How to Nail a Dictator”: New Film Tracks Struggle for Justice After Guatemalan Genocide is from Democracy Now. You can learn more here.

Guatemala: Voices of the Genocide is a series of videos on what occurred in Guatemala.

Here is how a CBS News story published in 2015 begins:

Around the world on Friday, tens of thousands of people of Armenian descent commemorated the genocide 100 years ago of 1.5 million Armenians by Ottoman Turks.

The annual April 24 commemorations mark the day when the mass killings started. An estimated 1.5 million died in massacres, deportations and forced marches that began in 1915 as Ottoman officials worried that the Christian Armenians would side with Russia, its enemy in World War I.

The event is widely viewed by historians as genocide. Turkey denies the deaths constituted genocide, saying the toll has been inflated and that those killed were victims of civil war and unrest.

Remembering the Armenian Genocide is from The New York Times.

Centenary of the Armenian genocide: descendants tell their family’s stories is from The Guardian.

Remembering Armenia’s losses is a photo gallery from The Boston Globe.

How to Teach About Genocide and Mass Atrocity is from Education Week.

20 Years Since the Srebrenica Massacre is a photo gallery from The Atlantic.

Srebrenica Massacre, After 20 Years, Still Casts a Long Shadow in Bosnia is from The New York Times.

Long before the Holocaust, Germany killed tens of thousands in Namibia. It will soon recognize this as genocide. https://t.co/C0QN5ShDJx pic.twitter.com/gkf9cuKKN5

How to Choose the Right Images When Teaching about Genocide is from Facing History.

April is Genocide Awareness and Prevention Month is from Enough.

Genocide Awareness Month is from The Shoah Foundation.

Here’s more information on the month.

30 Ways for 30 Days: Be an Upstander During Genocide Awareness Month

‘Butcher Of Bosnia’ Ratko Mladic Guilty Of Genocide, Crimes Against Humanity is from NPR.

Remembering The ‘Monstrous’ Legacy Of Ratko Mladic is from NPR.

A ‘Requiem’ for Cambodian Genocide Victims Wants to Help Bring ‘Peace to the World’ is from NBC News.

Genocide Still Happens is a lesson plan from Facing History.

Excellent article by @amandaottoway on the German engineered genocide of the Herero people in Namibia. The Herero have never received reparations. https://t.co/lazfGLGmwU

The Senate voted to recognize the Armenian genocide as a matter of American foreign policy, a move that was made over the objections of the Trump administration https://t.co/URmeODfjcG

The Armenian ‘genocide’: This is what happened in 1915 is from The Washington Post.

Biden calls mass killing of Armenians a ‘genocide’ in break with previous presidents is from The Washington Post.

Who are the Uighurs and why is China being accused of genocide? is from The BBC.

Genocide Still Happens: Help Students Understand Warnings for the Future and Echoes from the Past is from Facing History

President Biden just declared that what’s happening in Ukraine amounts to “genocide.” Is he right? https://t.co/PhWdAgArjp