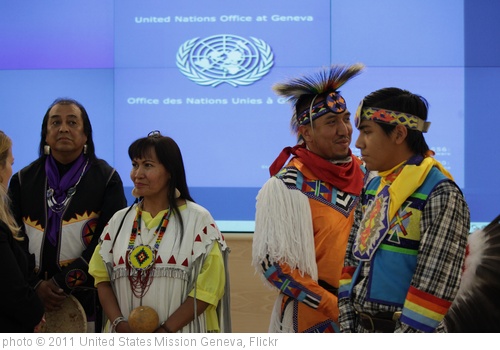 The United Nations has declared August 9th to be The International Day Of The World’s Indigenous People.

I don’t have a whole lot of time but, since it’s coming up, I thought I put together a simple list of related-resources and add to them later.

You might also be interested in A Beginning List Of The Best Folklore & Myth Sites and The Best Resources For Teaching & Learning About The Standing Rock Protests. Also, THE BEST RESOURCES FOR LEARNING ABOUT PROTESTS AGAINST THE TELESCOPE IN HAWAII.

Here are my choices for The Best Sites For International Day Of The World’s Indigenous People (and are accessible to English Language Learners):

PBS has an interactive map showing the indigenous roots of many place names in the United States.

The U.S. National Library of Medicine has a fascinating timeline of Native People’s Concepts Of Health And Healing.

The Smithsonian has an impressive collection of teacher materials related to Native Americans.

The Smithsonian also has a buffalo hide painting activity that I have used.

The Library of Congress has brought together many resources for Native American Heritage Month.

American Indian Responses To Environmental Challenges is an interactive from The Smithsonian.

Amazon Watch and Survival International are two groups working to assist indigenous peoples, and they both have multimedia resources (thanks to Willem for the tip).

The Ashaninka, A Threatened Way of Life is a slideshow from The Atlantic.

Latin American indigenous groups join forces to fight dams is from The BBC.

Here’s a “movie” showing the loss of Native American land over the past 250 years. You can read more about it at The Atlantic:

Indigenous Tribe Rises up in Colombia is a TIME slideshow.

Brazilian Police Evict Indigenous Squatters from 2014 Stadium Site is a photo gallery from The Atlantic.

An Indigenous Way of Life Threatened by Oil Sands in Canada is a photo gallery from The New York Times.

by UNWomen.
Explore more infographics like one on the web’s largest information design community – Visually.

Reel Injun: On the Trail of the Hollywood Indian is from PBS.

Teaching History has a number of related resources.

Native American and Alaska Native Heritage Month, Grades K-5 is from The NEA.

The Invasion of America: How the United States Took Over an Eighth of the World shows the takeover of land from Native Americans using a timeline slider.

The LandMark map shows indigenous land throughout the world.

The World Indigenous Games is a photo gallery from The Boston Globe.

PBS has a number of Native American Heritage Month resources.

The National Museum of the American Indian has lots of educational resources.

Erasing Indigenous Heritage is a photo gallery from The Atlantic.

This New Zealand river now has the same legal rights as a human being is from The Washington Post.

I had the privilege of visiting the Tarahumara a few years ago:

In the high-altitude city of La Paz, Bolivia, rates of heart problems dwarf those of cities at sea level. But an unexpected partnership between medicine and art is helping address this problem. Doctor Franz Freudenthal is a pediatric cardiologist who created a device that fixes abnormal openings in the heart through a non-invasive procedure. But these tiny, intricate devices cannot be made by machine, so Freudenthal enlisted help from the country’s indigenous Aymara women. With their traditional weaving skills, they knit these life-saving devices by hand. It’s the perfect blend of technology and artistry.

Here’s how National Geographic describes this next video:

Visit the colorful cemetery of Chichicastenango, Guatemala, where every year families repaint the graves of their departed loved ones. To outsiders, the passionate display of color may seem incongruent with loss of life—but according to indigenous Maya tradition, honoring the dead encourages the living to make peace with the inevitability of death.

American Indian Heritage Month: An Opportunity to Try New Ways of Educating about Native Americans is from The Smithsonian.

For Many Native Americans, Fall Is The Least Wonderful Time Of The Year is from NPR.

An American Secret: The Untold Story Of Native American Enslavement is from NPR.

“Americans” Is A Well Done Smithsonian Exhibition About Native Americans

I’m looking forward to more suggestions in the comment section..

Native-Land shows the territories and languages of native peoples in North America and in Australia.

Contested Lands is an impressive project from Pacific Standard Magazine.

Six Magnum photographers went out into remote regions around the world where indigenous communities are waging unseen battles against governments and commercial interests to remain on their ancestral lands. This is what they saw.

Everyday Native is a resource guide for teachers.

Lessons Of Our Land is “an innovative curriculum that enables Pre-K through grade 12 teachers to easily incorporate Native American stories, lessons and games into regular classroom instruction.”

The Stockton Unified School District has an excellent collection of Native American teaching and learning resources.

Japan’s ‘vanishing’ Ainu will finally be recognized as indigenous people is from CNN.

Native Knowledge 360 is from The Smithsonian.

Treaties Between the United States and Indigenous Nations, Explained is from Teen Vogue.

Disrupt Invisibility is a toolkit to “amplify the New Native Narrative in the media, pop culture, k-12 education, and other critical sections.”

It takes a village: Stories from Native Alaska is from Al Jazeera.

Trump Wants Immigrants to ‘Go Back.’ Native Americans Don’t. is from The NY Times.

The impact of the Transcontinental Railroad on Native Americans is from The Smithsonian.

Ecuador’s Unlikely Revolution is from Slate.

A Lost Generation: Learning About Family Migration from Indigenous Villages in Guatemala is a lesson plan from The Pulitzer Center.

It’s not just a uniform. Here’s how a school in Mexico is strengthening Indigenous students’ identities. pic.twitter.com/WOvHek5daV

I got to fit in stuff like this map of what ~150 years of colonization looks like. (Native American land loss from 1776 to 1930) which took me forever to animate so I made a gif of it pic.twitter.com/4XLX3KfGKq

Narratives of Native Nations: Indigenous Communities in the News is a lesson plan from the Pulitzer Center.

History is not your fault, but as long as people are still suffering, until there is justice, it is absolutely your responsibility.

U.S. Native land loss from 1776 to 1930
By Ranjani Chakraborty pic.twitter.com/8wpNXld6rC

Native American Resistance & Activism, Then and Now is a lesson from the National Museum of American History.

The National Museum of the American Indian has a collection of lessons and materials, including this one on The Trail of Tears. You can see links to all their resources on the left when you go to that link.

Unteaching the Native Narrative is from The School Library Journal. I’m adding it to the same list.

“Created and led by Native peoples, IllumiNative is a new nonprofit initiative designed to increase the visibility of – and challenge the negative narrative about – Native Nations and peoples in American society.”

This app will show you what Indigenous land you’re on is from CNN.

I’m adding it to The Best Sites For International Day Of The World’s Indigenous People:

After high-profile moments of cultural appropriation we’re often asked, “Well, what IS okay? How can people respectfully appreciate Native American culture?” While we cannot speak for all Native peoples, here are some general guidelines and questions allies can ask themselves. pic.twitter.com/q5BuNfCo3M

“History is being made, yet again,” @VP says as she swears in @SecDebHaaland to the Department of the @Interior. Welcome to the Cabinet! pic.twitter.com/yVViKgcOR8

Training the Next Generation of Indigenous Data Scientists is from The NY Times.

EXPLAINER: Why some schools in Canada have unmarked graves is from The Seattle Times.

I wrote about the thousands of unmarked graves continuing to be uncovered across Canada, Indigenous children’s deaths being deliberately covered up, and how these crimes have haunted this entire country.https://t.co/Nlbko0Zcjr

The discovery of unmarked graves at former schools for Indigenous children in Canada has revived conversations about the profound damage inflicted on generations of Indigenous families.

These photos show the relentless effort to erode their culturehttps://t.co/q0Vch4sp2G pic.twitter.com/TaWAKlH41R

Lost Lives, Lost Culture: The Forgotten History of Indigenous Boarding Schools is from The NY Times. 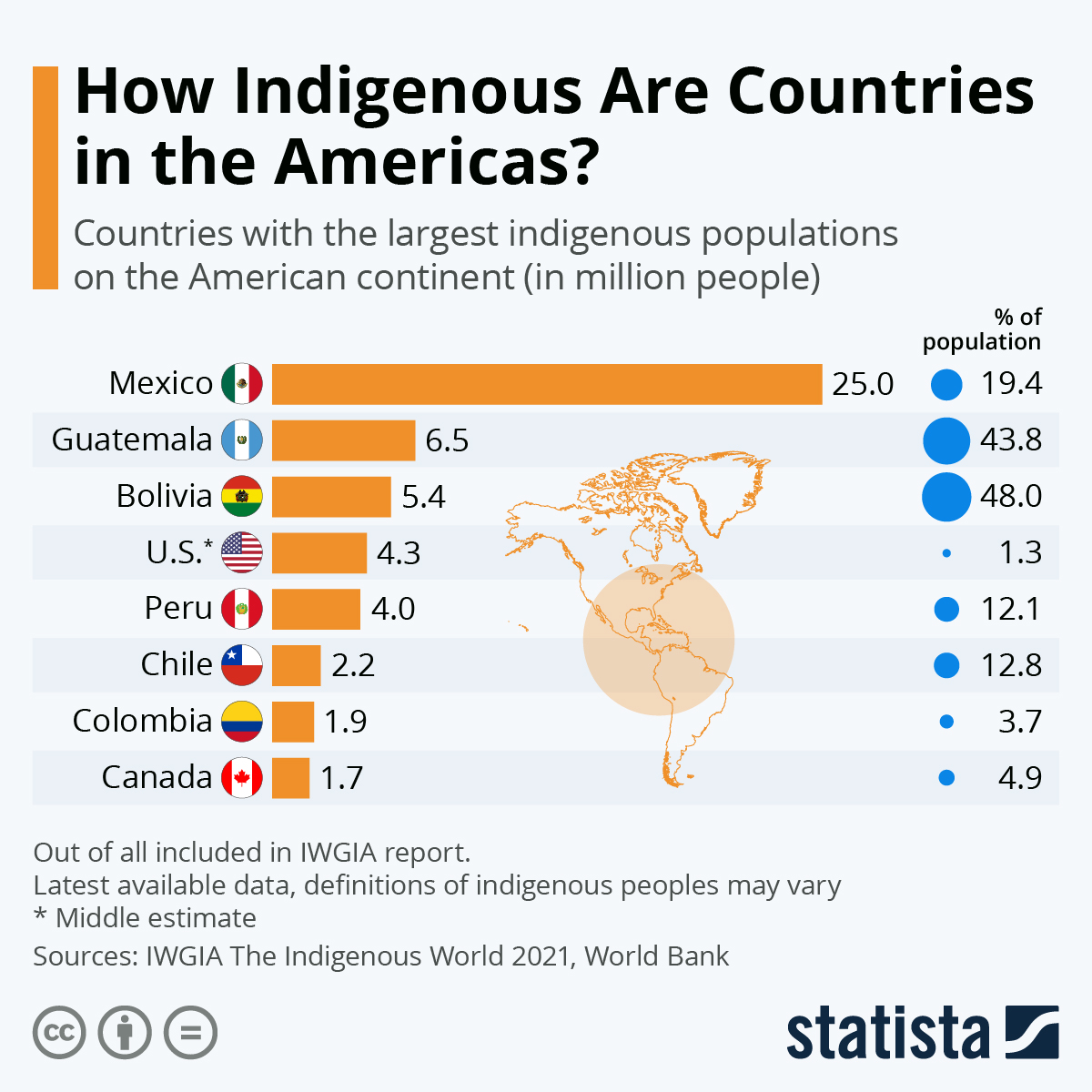 Is it cultural appropriation to wear another country’s national dress when you travel? is from CNN.

‘Cultural genocide’: mapping the shameful history of Canada’s residential schools is an interactive from The Guardian.

Infographic Of The Week: “The Global Chasm In Indigenous Life Expectancy”

Why some Indigenous people say land acknowledgements are a hollow gesture – CNN https://t.co/TUjz9G33fU

Lesson of the Day: ‘An Intimate Look at Mexico’s Indigenous Seri People’ is from The NY Times Learning Network.

Francis Begs Forgiveness for ‘Evil’ Christians Inflicted on Indigenous People is from The NY Times.

Indigenous lacrosse players want to reclaim the heart of the sport. For the Haudenosaunee, this includes an effort to be recognized by the I.O.C. before the game’s rumored return to the Olympics. I spent some time with them this month in Alabama: https://t.co/rCMBRHf7Tv

Native Americans tell Haaland their stories of being forced into boarding schools is from NPR.

🧵 Seldom-quoted #MLK: “Our nation was born in genocide when it embraced the doctrine that the original American, the Indian, was an inferior race. Even before there were large numbers of Negroes on our shore, the scar of racial hatred had already disfigured colonial society… pic.twitter.com/t3dk5oDvV4

Land Acknowledgment: A Classroom Activity for Secondary Students is from Lorena German.

Not The “Best,” But A List… Of Online Video Editors

Wow! Enroll Now To Get A Free Online NY Times Subscription For Your Classroom