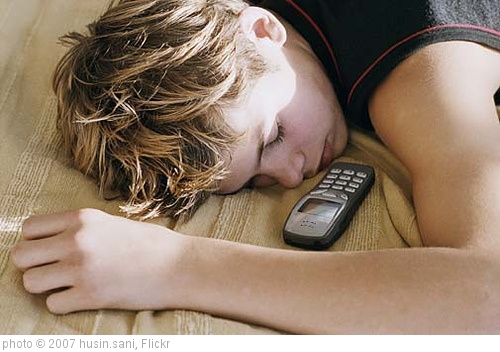 Earlier this year, I wrote about a lesson I did with my students on the importance of sleep. Since that time, I’ve also posted about new related resources. So, for the benefit of my readers, and for my own benefit of having them all in one place, I’m publishing this short “The Best…” list.

Here are my choices for The Best Resources For Helping Teens Learn About The Importance of Sleep:

“Will Sleeping More Make Me Smarter?” — A Lesson I’m Trying This Week is the extensive post I wrote describing the lesson I did. It went well.

More On Teen Sleep is another post I wrote sharing what a study says about the importance of “morning light” to teens.

Here are two resources I haven’t written about yet, but I’ll be incorporating them in future lessons I do about sleep:

Less sleep may add up to more pounds in adolescents

No More Dozing Off in First Period is a new article from Miller-McCune sharing recent research, including a school that has experimented with later start times.

Less Sleep Linked to Blues in Teens is a recent article in Scientific American.

“Catch Some Zzz’s to Lose Some Pounds”

More On The Importance Of Sleep

Night Owls at Risk for Weight Gain and Bad Diet is from Science Daily and reports on a new study.

The Other Big Deficit: Many Teens Fall Short On Sleep is from NPR.

No Rest for the Weary? Analyzing Sleep Habits is from The New York Times Learning Network.

Zombie Prevention: Your Child’s Sleep is also from The New York Times.

“Inside The Teenage Brain” is a PBS program that’s pretty dry, but informative. One its segments is on on teens and sleep (it says its embeddable, but it wasn’t working. Just go directly to the link).

A new study has been released specifically pointing to increased sleep leading to better athletic performances. You can read a San Francisco Chronicle story about the study, and a press release (Snooze You Win? It’s True for Achieving Hoop Dreams, Says New Study). Other studies show there are tons of benefits to sleeping longer. Maybe learning about this new information will provide an extra push to some of my students who have dreams of becoming star athletes or breakdancers.

4 Solutions to Teen Sleep Problems has some useful research on sleep.

Adolescents Who Sleep Better Score Higher in Math and Physical Education reports on a new study.

After a Good Night’s Sleep Brain Cells Are Ready to Learn is from The National Institutes of Health.

Lack of Sleep Makes Your Brain Hungry from Science Daily is a report on recent research.

Study Shows a Sliding Scale of Sleep Needed for Academic Achievement is from Education Week.

Sleep deprivation and teens: ‘Walking zombies’ is from Valerie Strauss’ blog at The Washington Post.

Why Sleep Deprivation May Lead to Overeating is from TIME Magazine.

Sleep helps learning, memory is from The Harvard Medical School.

The Brain May Disassemble Itself in Sleep is from Scientific American.

A’s from Zzzz’s? The Causal Effect of School Start Time on the Academic Achievement of Adolescents is a couple of years old, but is new to me.

When Should Schools Start in the morning? is from Scientific American.

A good night’s rest: The key to eating less? is from The Week.

Sleepy brains drawn to junk food is from CNN.

For God’s Sake, Let the Kids Sleep! is from The Wall Street Journal.

Are Sleepy Students Learning is by Daniel Willingham.

Disease and sleep: Recent studies find new links is a great infographic from The Washington Post.

Sleep is More Important than Food is from The Harvard Business Review.

Sleep Stealers: What’s Keeping Children From Getting Enough Shut-Eye? is from TIME.

Bright Screens Could Delay Bedtime is from Scientific American.

Why Sleeping May Be More Important Than Studying is from Mind Shift.

Sacrificing Sleep Makes For Run-Down Teens — And Parents is an NPR report on some recent research.

Less Sleep Leads to More Eating and More Weight Gain, According to New Study is from Science Daily.

Lost Sleep Can Lead to Weight Gain is from The New York Times.

How much is enough? Help your kids get a good night’s sleep is from NBC.

Lack of sleep blights pupils’ education is from the BBC

Cheating Ourselves Of Sleep is from The New York Times.

Study Links Workplace Daylight Exposure to Sleep, Activity and Quality of Life is from Science Daily.

Are Smartphones Disrupting Your Sleep is also from Science Daily.

Your Brain Cells Shrink While You Sleep (And That’s a Good Thing) is a report from TIME about a new study that’s been receiving a fair amount of media attention.

Getting In Bed With Gadgets is a very useful infographic, and they’ve also made it into an animated one below:

Getting in bed with GADGETS from z3u5 on Vimeo.

The Doctor Who Coaches Athletes on Sleep is an article from The Atlantic. It discusses the role of sleep in a variety of ways, including academic performance. There’s plenty of research on those areas at on this list. However, what makes this article stand-out from those others is its discussion of its impact on athletic performance. That info could be very useful with student athletes who might not be as concerned about its other effects.

Sleep after learning strengthens connections between brain cells and enhances memory is from Science Daily.

Too little sleep may trigger the ‘munchies’ by raising levels of an appetite-controlling molecule is from Science Daily.

To Get More Sleep, Get More Sunlight is from Forbes.

Experts Make a Case for Later School Start Times is from Ed Week.

Educating Kids About Sleep is by Annie Murphy Paul.

The Later You Stay Up, The More You Eat is from NBC News.

How Sleep Loss Adds To Weight Gain is from The NY Times.

Irregular bed times curb young kids’ brain power: And may have knock-on effects on health throughout life is from Science Daily.

How Sleep After Learning Enhances Memory is from Psy Blog.

Are Sleep Students Learning? is by Daniel Willingham.

Sleep: The E-ZZZ Intervention is from ASCD Educational Leadership.

Video: Study finds that teenagers are not getting enough sleep is from The BBC.

Video: Lack of Sleep in Teens is from ABC News.

Let Them Sleep In: Docs Want Later School Times for Teens is from NBC News.

Students Aren’t Getting Enough Sleep—School Starts Too Early is from The Atlantic.

High school will keep starting too early. Here’s why. is from Marketplace.

What is keeping your kids up at night? Turning off electronics helps everyone sleep better is from Science Daily.

Lack of sleep increases risk of failure in school is from Science Daily.

Why High schools Should Let Kids Sleep In is from The Washington Post.

Burning the Candle: Most US Kids Lack Sleep is from NBC News and reports on a recent study.

National Sleep Foundation Updates Recommendations For How Much Sleep You Really Need is from The Huffington Post.

Exactly How Much Sleep Is ‘Enough’? is from The Atlantic.

Sleep, Cognition, and Normal Aging is an intriguing new study that links good sleep habits when young to cognitive health in the senior years.

High School Is a Rude Awakening is from The Pacific Standard.

Irregular sleeping pattern may affect how teens eat is from Science Daily.

How quality of sleep impacts academic performance in children is from Eureka Alert.

Don’t worry, be happy: Just go to bed earlier is from Science Daily.

Zombieland? Tech Wrecking Sleep for Scores of Teens: Study is from NBC News.

How sleep helps us learn and memorize is from Science Daily.

The less you sleep, the more you eat is also from Science Daily.

The Good Habit Which Boosts Self-Control is from PsyBlog and Teenagers Who Don’t Get Enough Sleep at Higher Risk for Mental Health Problems is from Scientific American.

The American Academy of Sleep Medicine has released its first recommendations for how much sleep people need at different ages. Here are some articles about it:

How much sleep do kids and teens really need? New recommendations from experts. is from The Washington Post.

Here’s How Much Sleep Babies and Kids Need, By Age is from TIME.

Small increases in sleep improve grades is from Science Daily.

The powerful thing that happens when the school day starts in the afternoon is from The Washington Post.

High School Kids Aren’t Sleeping, and Have Accidents As a Result is from NBC News.

How kids’ brains respond to a late night up is from Science Daily.

Teen Night Owls Struggle To Learn And Control Emotions At School is from NPR.

How Sleep Enhances Studying is from Psychology Today.

Why teen brains need later school start time is from The Conversation.

Sacrificing sleep to get top grades doesn’t work, study finds is from The Telegraph.

Why school should start later for teens is a TED Talk.

Insufficient sleep may be adding to your waistline is from Science Daily.

Removing digital devices from the bedroom can improve sleep for children, teens is from Science Daily.

Quality of children’s sleep may affect eating habits and weight is from Science Daily.

How sleep loss may contribute to adverse weight gain is from Science Daily.

California Teenagers Could Sleep Later Under School Start Bill is from The NY Times.

Let Teenagers Sleep In is from The NY Times.

No delay to school start times after Jerry Brown vetoes California bill is from The Sacramento Bee.

At these schools, later start times get an A-plus for youths needing more sleep is from The Washington Post.

The One Change That Boosts a High School’s Academic Performance is from Scientific American.

Screen Use at Bedtime May Impair Children’s Quality of Life is from The NY Times.

The Sleep Habits That Can Improve Your Grades, According to a New Study is from TIME.

How will Sacramento-area schools adjust to later start times? Clock is ticking under new law is from The Sacramento Bee.

Like it or not, science backs up your teen’s love of the snooze button is from CNN.

STATISTIC OF THE DAY: STUDENTS DON’T GET ENOUGH SLEEP

Good Sleep Habits Are Better Than a Good Night’s Sleep for Test Performance, Study Finds is from Ed Week.

How sleep helps teens deal with social stress is from Eureka Alert.

When the school day starts later, teens get better sleep and feel more motivated is from BPS Digest.

The State Finally Letting Teens Sleep In is from The Atlantic.

What Is The “Zeigarnik Effect” & How Did I Apply It In The Classroom Today?