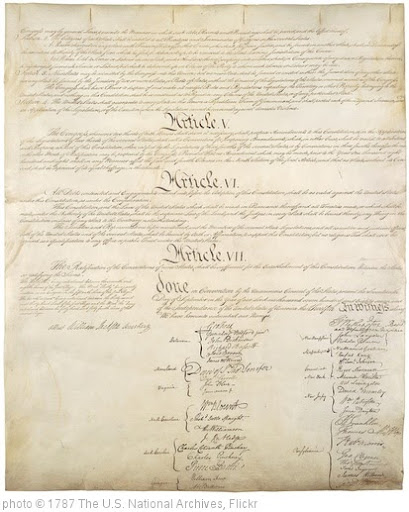 Here are my choices for The Best Sites For Learning About The Constitution Of The United States:

The Constitution Center has to be everybody’s first stop. It has a ton of resources. They are particularly known for their Interactive Constitution and lots of other online interactives and games.

Here are collections of the online lessons I used in my United States History classes last year on the Bill of Rights and on the Constitution.

The Constitution For Kids has three “levels” of explanations about the U.S. Constitution. An English Language Learner — from high Beginning to Advanced — can choose which one he/she finds most accessible.

The History Channel has many multimedia features related to the Constitution.

Quiz Tree has some interactive quizzes on the Constitution.

Resources for Teaching the Constitution is a nice compilation of resources from The New York Times Learning Network.

For Constitution Day, I can’t think of anything that would prepare a teacher better than to read Bill Bigelow’s piece, It’s Constitution Day! Time to Teach Obedience or History?

Here are the last two paragraphs:

Asking students to think critically about the Constitution is not a demand for them to come to any particular conclusion about the Constitution and those who drafted it. Rather, treating the Constitution as a product of social conflict and written by partisans in that conflict implicitly gives students permission to become thinkers. No longer intimidated by the document’s holy status, they can analyze and draw their own conclusions. And part of the analysis that our students need to do today is to ask of any social policy: Who benefits? Educators can introduce race and class as key categories of inquiry — an exploration that is essential if young people are to think clearly about everything from climate change to health care.

Today, we need young people who can look at the world from multiple perspectives — especially from the perspectives of those who may not be well served by our society’s arrangements of wealth and power. On this Constitution Day, let’s encourage schools to teach outside the textbook as part of a broader curriculum of critical thinking.

Constitution Games is from PBS.

Mr. Nussbaum’s Page on the Constitution.

The Constitution and Bill of Rights from iCivics.

Here’s a lesson from the PBS News Hour.

Text to Text | ‘Let’s Give Up on the Constitution’ and ‘The Constitution of the United States’ is from The New York Times Learning Network.

What’s So Important about Sept. 17? is from Learning English.

TED-Ed has just published this new lesson and video:

DocsTeach: A Special Page Devoted to Teaching the U.S. Constitution

Lessons from the Center For Civic Education.

Learning English Voice of America has a special feature for ELLs on The Making Of The Constitution.

I recently revisited The National Constitution Center. Over the years, they’ve been a bit irregular in the resources they’ve posted – kept them online off-and-on – but now that appear to have some nice new ones.

You can see all of them at this page on their site (assuming they don’t reorganize it again). They include several engaging online games.

One interactive I particularly like is called Rights Around The World. It shows what rights are guaranteed by which country’s constitutions, and fits right in with the activity I do each year in U.S. History where students create a Bill of Rights for their own country (that lesson is borrowed from ReThinking Schools).

ConSource US Constitution for Kids offers educators and students the opportunity to read the original text of the Constitution alongside unbiased translations that are easy for students to understand. Also included is useful background information, which places each clause in historical context. (from Center For Civic Education)

Here’s an interesting interactive from The NY Times about possible Constitutional amendments.

Here’s a great post by Jennifer Orr about how she taught about the Constitution.

How ‘Fair’ Is Our Government? And Other Big Questions Teachers Are Posing for Constitution Day is from Ed Week.

If you found this post useful, you might want to look at the 480 other “The Best…” lists and consider subscribing to this blog for free.

“Where Are The Jobs?”

My Best Posts Over The Years — Volume Three