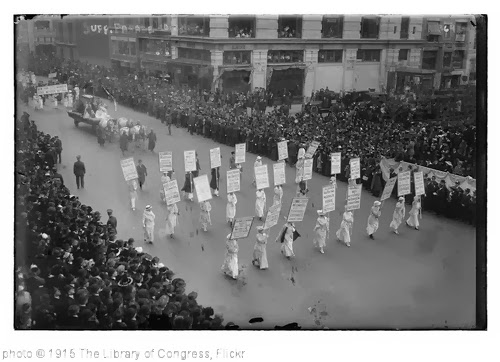 Ninety years ago today, suffragists won the right for many – but not all – women to vote in the United States.

This is going to be a very short “The Best…” list because I’ve already collected many related resources for a lesson on my United States History class blog. Since it’s late, and I’m tired, I will pointing people to that link instead of redoing it all here. But I’ll also include a couple of new resources.

Here are my choices for The Best Resources For Learning About Women’s Suffrage:

Women Work For A Better America is my lesson that’s filled with resources at our class blog.

Anti-Suffragette postcards is from History Extra.

100 Years Ago, The 1913 Women’s Suffrage Parade is a photo gallery form The Atlantic.

Winning the vote for women is from the Smithsonian.

The Fight for Women’s Suffrage Videos is from The History Channel.

Check out this video and find lyrics and more info here

The Root: How Racism Tainted Women’s Suffrage is from NPR.

7 Things You Might Not Know About the Women’s Suffrage Movement is from the History Channel.

Photos: The Battle for Women’s Suffrage in the U.S is from The Atlantic.

Women of color were cut out of the suffragist story. Historians say it’s time for a reckoning. https://t.co/Xk3oFkWU5v

The Complex History of the Women’s Suffrage Movement is from The NY Times.

‘Brilliant and politically savvy:’ The roles of African American women in the fight to vote 100 years ago is from USA Today.

Extending Suffrage to Women is from The National Archives.

As the 100th anniversary of the 19th Amendment approaches, 2 experts on indigenous feminism look at the role of Native women in the suffrage movement, and the battles for equality they’re still fighting today https://t.co/8FuMUQ2U94 pic.twitter.com/S2SPJZEiP0

“The problem with the word ‘suffrage’: It excludes Black women activists.” https://t.co/Ex0h9s8DGD

In 1920, Native Women Sought the Vote. Here’s What’s Next. is from The NY Times.

Historian Martha S. Jones talks to TIME about the real story of how Black women got the right to vote https://t.co/tRZ5D4QEuw #sschat #apush #apgov #hsgovchat @marthasjones_

Meet the Brave but Overlooked Women of Color Who Fought for the Vote https://t.co/RLPjcNY2Qk

On newsstands today: a 44-page special section from me and my colleagues @nytimes, all about American women’s battle for the vote! https://t.co/0fDXm8uvmj pic.twitter.com/quxZg1sUQw

19 Ways to Teach the 100th Anniversary of the 19th Amendment is from The NY Times Learning Network.

Commemorating women’s right to vote is another interactive.

If you found this post useful, you might want to look at the 490 other “The Best…” lists and consider subscribing to this blog for free

Video: “Which Countries Have The Most Refugees?”

The Best Online Activities For Learning About Time Zones