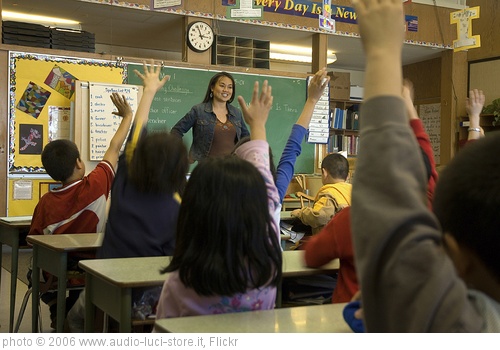 Teacher tenure is under attack in several states (and, just , two more articles about these efforts appeared in the Christian Science Monitor and at NPR). Given this effort, I thought a list on this topic would be useful. (Since I originally posted this list, I’ve edited it to include an important and related topic — seniority based layoffs).

Here are my choices for The Best Articles For Helping To Understand Why Teacher Tenure Is Important:

The myth of teacher tenure is a piece by professor Perry Zirkel. It appeared at the Washington Post blog of Valerie Strauss.

Positives, negatives, problems and some suggestions for tenure is by Stephen P. Blum, the president of the Ventura Unified Education Association.

What Teacher Tenure Is — And What It’s Not appeared in NEA .

The Times’ Tenure Math Problem is a very interesting post by Corey Bower.

Is it Time to Trash Tenure? is by Anthony Cody at Ed Week.

Hess Cherry-Picks Hechinger is a short, but useful, post by John Thompson over at This Week In Education.

These next two resources are wide-ranging interviews with Diane Ravitch where she responds to questions about many school reform issues, including ones on teacher tenure. One is from The Economic Policy Institute and the other is from GOOD.

You Bet Your LIFO (last in/first out) is a great post by Nancy Flanagan at Ed Week.

A Quality-Based Look At Seniority-Based Layoffs comes from The Shanker blog.

The New York Post has an article opposing the use of seniority in lay-offs, but Anthony Cody has left a nice, short, and useful comment summarizing the problems with eliminating its use.

Teacher Tenure Necessary, Says Teachers’ Unions is the headline of a very useful NPR interview with Randi Weingarten of the United Federation of Teachers.

Indiana Informs Wisconsin’s Push is a very interesting article in The New York Times. Not only does it provide a scary picture of what happens without collective bargaining, it also includes a quote from a political supporter of Wisconsin Governor Walker’s bill eliminating it that explains what teacher tenure is so important:

“I’ve talked to many teachers and public works employees in my county,” he said, “and almost every conversation comes around to the impact on their seniority and their concerns that their boss doesn’t like them and they won’t be treated fairly, and frankly I think there’s something to that.”

There have been some good posts challenging comments by some “school reformers” that the experience of having many years in the classroom is over-rated. They say that after the first few years, it has no impact on student achievement. Here are some posts rebutting that claim:

The Teaching Experience at the Shanker Blog

Firing Teachers with Due Process is a good piece from Forbes that rebuts a different claim — that it takes many years to get rid of a bad teacher.

What Is the Meaning of LIFO: You’re Fired Mr. Chips! is a good piece recounting the history of “Last Hired: First Fired.”

In Performance Evaluations, Subjectivity Is Not Random is from The Shanker Blog.

Experience makes teachers better — we’re worth the cost is by Edward Johnson.

How to Raise the Status of Teachers is the title of a decidedly less-than-impressive collection of responses to that question in The New York Times. However, the piece by Samuel Colbert, Allow More Autonomy, does stand-out. He is the author of a similarly impressive piece that The Times previously published, Why Your Boss Is Wrong About You.

LIFO is good Part II is by Gary Rubinstein.

Teacher Defends Seniority Rights is by by Julie Cavanagh.

Removing Teachers at Will is by Walt Gardner at Education Week.

Our Experience Proves Tenure Is Not Obsolete is from Gotham Schools.

Here’s a great piece by Norm Scott on tenure that appeared, in all places, the Costco Newsletter.

Unexpected Benefits: A Defense of Teacher Tenure is from Ed Week.

What’s Missing In The Debate On Senority? is a new report from Annenberg Institute for School Reform. It’s probably the best analysis of the topic that I’ve seen.

Why Are Teachers So Upset? is by Diane Ravitch.

Abolish Tenure? is by Richard Kahlenberg.

Is Seniority for Teachers Bad for Students? is by Anthony Cody at Education Week.

On the need for unions and seniority is by David B. Cohen.

This Just In: Experience Matters is from The American Institutes of Research.

Quote Of The Day: Creating Stability In Communities

Notes on the Seniority Smokescreen is from School Finance 101.

The need for seniority in schools is by Lisa Haver.

All schools should have good teachers is from The Los Angeles Times.

How Seniority Reform Backfired In Minneapolis is by John Thompson.

The question of experience—teaching made simple? is by Barnett Berry.

Would Ending Tenure Help Schools? is from The NY Times.

TNTP (Once Again) Proves that It’s Anti-Teacher & Anti-Union is a great piece by John Thompson on teacher tenure.

No, It’s Not “Nearly Impossible” to Fire Bad Teachers is a very good commentary by Nancy Flanagan about an offensive TIME Magazine cover that insulted teachers.

Don’t abolish teacher tenure is by Donna Brazile. It appeared at CNN, and talks about the TIME piece, also.

Statistic Of The Day: “For Teachers, Experience Really Does Matter”

How Due Process Protects Teachers and Students is by Richard D. Kahlenberg.

Does Teaching Experience Increase Teacher Effectiveness? A Review of the Research is from The Learning Policy Institute.

California’s Ed Reform Wars is from The American Prospect.

Q&A: The Economic Consequences of Denying Teachers Tenure is from The American Prospect.

Study: Weakening Tenure in Louisiana May Have Caused Thousands of Teachers to Quit is from The 74.

Study: When Tenure Is Taken Away, Teachers Leave is from Ed Week.

Last In, First Out is by Tom Rademacher.

STATISTIC OF THE DAY: TEACHERS TEND TO GET BETTER WITH TIME

PROOF POINTS: Debunking the myth that teachers stop improving after five years is from The Hechinger Report.