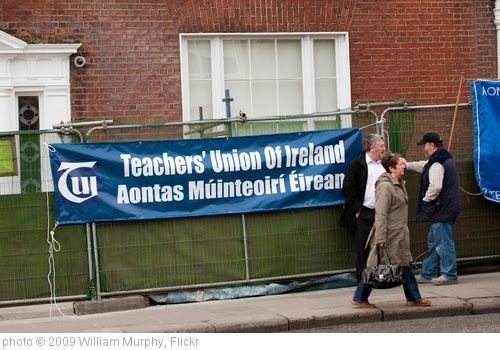 Also, see The Best Resources On The Awful Friedrichs Case

In light of the regular attacks on teachers unions, I thought a “The Best…” list highlighting their benefits would be useful.

These attacks are exemplified by this satire at “Ed Tweak”:

Davis Guggenheim today received an Oscar
nomination for best adapted screenplay, for his
heart-wrenching film Waiting for Superman.
The movie screenplay, based on the book
“Teacher Unions: Spawn of Satan,” combines
the documentary and horror genres in a way
never before seen. It tells the story of five children
as they try to escape from unionized teachers who are, in fact, zombies and vampires.

I’m very interested in hearing suggestions about additional articles I should include.

Here are my choices for The Best Resources For Learning Why Teachers Unions Are Important:

In defense of teachers’ unions by Ken Bernstein

In Praise of Teacher’s Unions by Matt Yglesias

It’s Not the Teachers’ Unions at The American Prospect

The Role Of Teachers’ Unions In Education from NPR

Rethinking Schools has a number of related articles and resources.

Teachers Unions, ACT/SAT, and Student Performance: Is Wisconsin Out-Ranking the Non-Union States? is a very important post by Angus Johnston. He examines the research connecting the role of teachers unions to student achievement.

I’m going to print an excerpt here, but you’re making a mistake if you don’t read his entire post:

There’s only been one scholarly effort to tackle this problem that I’m aware of. Back in 2000, three professors writing in the Harvard Educational Review did a statistical analysis of state SAT/ACT scores, controlling for factors like race, median income, and parental education. They found that the presence of teachers unions in a state did have a measurable and significant correlation with increased test scores — that going to school in a union state would, for instance, raise average SATs by about 50 points.

Two other findings leap out from the Harvard Educational Review study. First, they concluded that Southern states’ poor academic performance could be explained almost entirely by that region’s lack of unionization, even when you didn’t take socioeconomic differences into account.

And second, and to my mind far more interesting, they found that concrete improvements in the educational environment associated with teachers’ unions — lower class sizes, higher state spending on education, bigger teacher salaries — accounted for very little of the union/non-union variation. Teachers’ unions, in other words, don’t just help students by reducing class sizes or increasing educational spending. In their conclusion, they stated that

Teachers, Their Unions and the American Education Reform Agenda is a report issued by National Center on Education and the Economy.

Even with all of its faults, I’m sticking with the union is by Peter Schrag.

Scapegoating is by Richard Kahlenberg.

Unions pivotal to U.S. future is from The Sacramento Bee and has a nice section in it about teacher unions.

Why I Support the Teachers Unions is by E.D. Kain at Forbes.

Unions and the Public Interest is by Richard D. Kahlenberg.

Bipartisan, But Unfounded: The Assault On Teachers’ Unions is by Richard Kahlenberg.

Blame It All On Teachers Unions is by Walt Gardner at Education Week.

Unions and the Concept of ‘Adult Interests’ is from Ed Week.

Why public education needs teachers unions is by Gary Ravini.

This is not good news: Fewer than half of teachers now covered by unions is from USA Today.

The End of Public-Employee Unions? is from The Atlantic.

Activists look to courts to weaken grip of California teachers union is from The Sacramento Bee. What AFT members need to know about the ‘Friedrichs’ case is from The American Federation of Teachers.

The Myth of Unions’ Overprotection of Bad Teachers: Evidence from the District-Teacher Matched Panel Data on Teacher Turnover is a new research paper I learned about through The Shanker Institute. Here’s an excerpt:

‘The idea that strong teacher unions impede education quality is ludicrous’ is from TES.

Teacher Unions Are ‘Bargaining for the Common Good’ is from The American Prospect.

What If Everything You Thought You Knew About Teachers Unions Turned Out to be Wrong? is from EdShyster.

Teachers’ unions and school performance: Evidence from California charter schools is a new study showing that student achievement increased in charter schools after they unionized. Chalkbeat has an article about the study.

Dynamic Teacher Unions are the key to Assuring a World Class Education’ is the headline of a two-part series in my Education Week Teacher column.

Can Weak Unions Get Teachers More Money? is from The NY Times.

What Do Teachers Think About How Teachers’ Unions Affect Schools? is from The Shanker Blog.

Teacher unions may be more important than ever in 2020 is from Brookings.

Teachers’ Union Power in a Budget Crunch: Lasting Ramifications of Differential Spending Responses to the Great Recession is a new research paper.

The Best Sites For Learning About Prehistoric Cave Paintings

The Best Resources On “Becoming What We Read”

Why & When To Ask The Question “Why?”