The Best Sites For Learning About Mount Everest 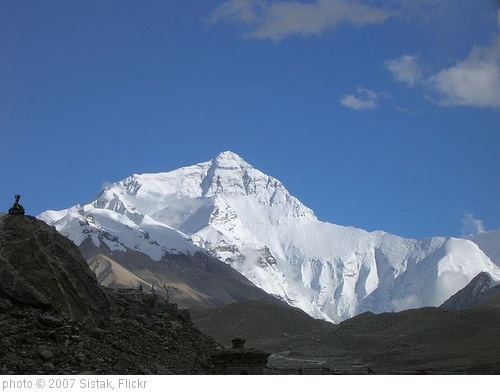 The final unit of the year in our ninth-grade English classes is on Mount Everest. I thought it would be useful to our school’s teachers and to this blog’s readers (and to me!) to try to compile the best related online resources into one list.

Here are my choices for The Best Sites For Learning About Mount Everest:

I’ll start off with several Everest-related assignments we have on our class blog.

National Geographic has an Everest site.

Here’s a panorama taken from the summit.

Take a brain test scientists have given Everest climbers to see what affect climbing has on them.

Here’s a nice video that shows a typical climbing route and the importance of acclimatizing (going back and forth to get one’s body acclimated to the altitude):

Here are some videos from the summit:

The Glass Ceiling is a movie about the first woman Sherpa to climb Mt. Everest. Here’s the movie trailer:

Climb every mountain: visualising the world’s 50 most prominent peaks is from The Guardian.

Meet Yuichiro Miura, the man who skied down Mt. Everest 40 years ago is from The Smithsonian.

Richard Byrne also suggests some good resources on his blog.

Why climbers continue to feel Mount Everest’s allure is from The BBC.

Chilling photo shows bottleneck on Mount Everest as dozens of climbers try to reach summit on weekend when four died is from the Mail Online.

Mount Everest: the ethical dilemma facing climbers is from The Guardian.

A Sherpa’s View of the Mount Everest Traffic Jam is from The New York Times.

In our ninth-grade unit on Mount Everest, we also look at other mountains and their climbers, so I’m adding it to this list.

Here’s a great quote from Edmund Hillary with an engaging image.

Mount Everest Is Not Immune to Climate Change is from The Smithsonian.

Oldest person to scale Mount Everest says climb will be his last despite rival, 81, bidding to break his record is from The Mail Online.

Mount Everest base jump marks 60th anniversary of first ascent is a video from The BBC.

Everest: 60 years of mountaineering – interactive is from The Guardian.

Climbing Mount Everest is a photo gallery from The Boston Globe.

How deadly are the world’s highest mountains? is a chart from The Economist.

aljazeera has made an engaging thirty minute video about climbing Mount Everest:

Survivor recalls how ice tumbled down in Mount Everest avalanche is from CNN.

Death Is Part of the Business for Everest Sherpa Guides is from NBC News.

Fear For Sherpas’ Future Grows With Each Climbing Tragedy is from NPR.

Who Are Nepal’s Sherpas? is also from NPR.

Sherpas Move to Shut Everest in Labor Fight is from The New York Times.

Himalayan death tolls is an infographic from The Washington Post.

Death and Anger on Everest is from The New Yorker and is probably the best piece written on the tragedy. It’s by Jon Krakauer.

Mount Everest’s Sherpas Shut Down the Rest of This Year’s Climbing Season is from The Atlantic.

Sherpas, Fate and the Dangerous Business of Everest is from The Wall Street Journal.

Scaling Everest is a very neat new interactive from The Washington Post.

Everest – A Tribute to the Fallen from Elia Saikaly on Vimeo.

Mount Everest, Toilet is from The Atlantic.

There Are Over 200 Bodies on Mount Everest, And They’re Used as Landmarks

The top of the world: A timeline of climbing Everest is from The BBC.

What is the real cost of climbing Everest? is also from the BBC.

Death in the clouds: the problem with Everest’s 200+ bodies https://t.co/ya6Yo54NMZ pic.twitter.com/bmWVnEOcCw

Peaks and Valleys is an interactive showing the highest and lowest points in the world.

Deliverance From 27,000 Feet is the headline of a New York Times article and interactive that tells a tragic story of climbers and body removal at Everest.

How Much Does It Cost to Climb Everest is from TIME.

They are bit of mixed bags in term of quality, but Geography Pods and Montana State University both have a bunch of Everest-related lesson plans.

Here are some new videos from CNN:

In photos: Mount Everest is like a choked city street these days is from Quartz.

Race To Everest is an interactive map.

Lhakpa Sherpa has climbed Mount Everest 10 times, the most ascents ever by a woman. A lack of sponsorship deals means much of her training takes place at a Whole Foods in Connecticut where she works. https://t.co/OxCvYIXAo1 pic.twitter.com/IVID6zmY8y

Even More On Columbus Day