The Best Posts & Articles About Compromise 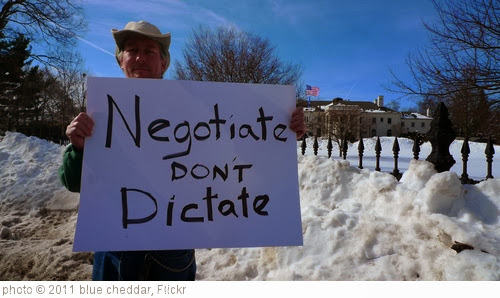 Here are my choices for The Best Posts & Articles For Learning About Compromise:

I’ll start off with a few previous posts I’ve written on subject:

The importance of being unprincipled

The Art & Importance Of Compromise

Here are articles from other sources:

Obama Cites Lincoln As Model Of Principled Politician Who Compromised is from NPR.

Ben Franklin on compromise is from TIME Magazine.

What The Word ‘Compromise’ Really Means is from NPR.

NPR has a nice story on the head of the Humane Society and the head of the Egg Producers group reaching a compromise on national legislation. It would have been nice if the two sides also had to have broader interaction between their constituencies to reach the deal. That might have happened, but the story doesn’t say anything about it. Nevertheless, I’m adding it here.

Accommodations And Compromises (& Two Questions About Them)

The Washington Post has republished Daniel Willingham’s post on civility in the education reform debate and my response to it that was posted in my blog, It’s Not About Who’s “Evil” — It’s About Who’s Willing To Make A Deal.

Give and Take:Empirical Strategies for Compromise is from The Association For Psychological Science.

Is ed reform headed for its own Bay of Pigs? is by Kathleen Porter-Magee.

Fiscal cliff negotiations show how not to make a deal is from CNN.

When Should You Compromise? is from The New York Times Learning Network.

“Cutting a deal doesn’t necessarily have to mean capitulation”

Lincoln, Obama & The Importance Of Compromise

Psychology of Compromise: Why Congress Fails is from Live Science.

How Not to Compromise is from TIME

Quote Of The Day: “For Mandela, Reverence, but Criticism, Too”

The Neuroscience Guide to Negotiations With Iran is from The Atlantic.

VALUABLE NY TIMES COLUMN ON THE IMPORTANCE OF COMPROMISE

If you found post useful, you might want to look at the 700 other “The Best…” lists and consider subscribing to blog for free.

The Best Virtual Tours Of Zoos