The Best Resources For Learning About Higgs Boson, The “God Particle” 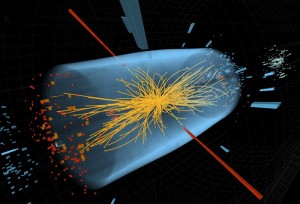 The scientists who first suggested there was a Higgs Boson, also know as the “God Particle,” were just awarded the Nobel Prize.

A New Particle Could Be Physics’ Holy Grail is from The New York Times.

Newly Discovered Particle Appears to Be Long-Awaited Higgs Boson is from Wired.

And The New York Times has collected several excellent videos on Higgs Boson.

CERN Discovers A New Particle, Likely The Higgs Boson is from NPR

(Here’s the latest from the BBC in March, 2012 — Higgs boson hints multiply in US Tevatron facility data)

I don’t know about you, but it has not been easy for me to get a handle on what Higgs Boson, the so-called “God Particle,” is all about….

So, with all the media attention over the past few days about its possible discovery, I thought I’d bring together some resources that might be useful for a layperson like me.

Here are my choices for The Best Resources For Learning About Higgs Boson, The “God Particle”:

The ones that helped me best understand it were:

World’s biggest experiment discovers key to universe from CBBC Newsround — too bad for the headline since my understanding is that they’re not sure yet they’ve found it.

Physicists search for the mysterious Higgs boson is an Associated Press interactive.

What is the Higgs boson? is from The Guardian.

And here are some other decent resources:

Q&A: The Higgs boson is from the BBC.

National Geographic has an interactive.

MSNBC has another interactive.

What Is Higgs Boson? is a pretty good infographic.

Former science minister, William Waldegrave, offered a prize in 1993 for the best lay explanation of the Higgs Boson. Professor David Miller, of UCL, won the prize with the following analogy….

Check out their interactive demonstrating it.

A Roundup of Higgs Boson Jokes on Twitter is from Boing Boing.

The Fantastic Machine That Found the Higgs Boson is a photo gallery from The Atlantic.

Here’s What the Higgs Boson Sounds Like is from The Atlantic.

Interactive Panorama: Step Inside the Large Hadron Collider is from TIME.

The Higgs, From Theory to Reality is an interactive timeline from The New York Times.

My Best Posts On New Research Studies In 2013 – Part Two

Gold Mine: “Teach About Climate Change With These 24 New York Times Graphs”