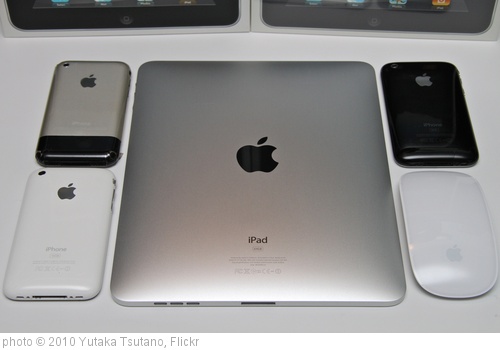 Though I haven’t gotten an iPad yet (NOTE: Now I have!), we did get one for my mother-in-law. So, with an eye towards helping her now, and me in the future, I put out a call to readers to their suggested resources as well as hunting for them on my own.

Here are my choices, and choices suggested by readers (their recommendations are better than mine!), as The Best Resources For Beginning iPad Users:

iPad Getting Started is from TC Geeks.

The best iOS apps for children, 2011 is also from The Telegraph.

The top 50 iPad apps is from The Guardian.

Choosing the Right Keyboard For Your iPad is from Read Write Web.

The Best iPad Apps: 10 Essential Apps For The New iPad You Got For The Holidays is from The Huffington Post.

iPads In The Art Room

…an directory of apps for education by Apple Distinguished Educators (ADEs) to help you transform teaching and learning.

It has over 1,300 categorized apps, including a ton organized by Bloom’s Taxonomy.

Here are great suggestions from readers:

Paul McKean has an excellent collection of fifteen useful links.

Chrissie Turkington recommends iPad Tips: Getting Started with the iPad.

Julia Ault has compiled an excellent collection of iPad resources.

I am such a newbie and the apps that have excited me so far are 1. iSpeech Translator, which will convert spoken words to text and then translate, sometimes with spoken words at the other end too. Not perfect, but may be useful in a multi-language classroom and 2. a PDF annotating tool such as GoodNotes or UPad, which obviously can be used to highlight and make margin notes but can also be used on blank “paper” to scribble quick ideas or diagrams. UPad has more features, but GoodNotes has a simple, clean interface and easy access to Dropbox.

Don’t be afraid to put your new iPad through its paces. Consider all of the tasks you perform, media you consume, with other tech gadgets (phone, ereader, laptop/desktop, even tv, etc.) and try them on the iPad. And explore the wide variety of apps. I gathered a list of educator-recommended apps at a recent conference – the productivity apps are particularly helpful.

App Start is a great little app that walks newbies through the best apps in many different catagories. App Tracker is another good one that tracks the best FREE apps by category as well. Looking forward to seeing your post as I am also collecting info for beginning users.

Sorting Out an Avalanche of iPad Apps for the Best of 2011 is from The New York Times.

The School That Launched 1,000 iPads is a useful post from Richard Byrne’s blog.

IPads In The Classroom comes from Ed Tech Teacher.

The Very First App You Should Load on Your New iPad is from Jeffrey Thomas.

And if you’re considering using iPads in the classroom, Redefining Instruction With Technology: Five Essential Steps by Jennie Magiera is a must read.

20 Great Classroom iPad Apps to add to your Collection (1-5) is from Tom Barrett.

My Ten Most Used Apps to Become Fluent on the iPad is from Langwitches.

15 Favorite iPad Apps As Selected By Teachers is from Emerging Ed Tech.

iPad in Education Resources Worth Exploring is from Bill Ferriter.

6 Tips to Improve Typing on the iPad

Jeffrey Hill has begun a new blog called iPad English that is focusing on….using the iPad for English teaching and learning.

8 Great Free Web Resources Focused on Using the iPad in Education is from Emerging Ed Tech.

Stephanie Cook has a good Pinterest Board for iPads.

Ten Tips and Tricks Every iPhone and iPad User Should Know is a very helpful article.

Draw and Tell looks like a useful iPad app that lets you “Draw or color, add stickers, then talk about your drawing.”

102 Interesting Ways to use an iPad in the Classroom

Book Creator seems like the easiest tool for making “talking books” on the iPad. Langwitches has a tutorial on using it. I originally heard about the tool from Lea Anne.

iPad Publishing seems to have a good list of useful and educational iPad apps.

Here’s a Co.Design post about Haiku Deck, a presentation app for the iPad.

Four Reasons Why School Tablet Rollouts Can Stumble – Or Fail is from ZD Net.

Little Story Maker App: Listening, Reading, Customizing, Personalizing is a post from Langwitches about an other bookmaking app.

5 Critical Mistakes Schools Make With iPads (And How To Correct Them) – From Tom on Edudemic is from Ed Tech Teacher.

Dispelling the Myths About 1:1 Environments is from Edutopia.

What Students Can Actually DO With An iPad is from Edudemic.

Have Gadgets, Will Travel: 10 Tech Tools for Turning Your iPad into a Mobile Workstation

Top 50 iPad Apps: The Best Apps in Every Category for Your New Tablet is from ABC News.

iPad starter kit: 100 essential apps is from The Telegraph.

17 Pros and Cons of Using iPads in the Classroom is from Teachers With Apps.

A Video Tour of My Teacher iPad is from Chris McWilliams.

5 Useful iPad Apps For ESL Students is from Edudemic.

Introducing Mobile Technology Into Your Classroom: Structures and Routines is from Edutopia.

The Smart Way to Use iPads in the Classroom is from Slate.

Reading a Bedtime Story Together from Afar is a NY Times article about a neat iPad app.

Use Haiku Deck to Build Academic Vocabulary is by Peter Pappas.

Resources For The iPad is from John Larkin.

Losing an iPad: Simple Things to Protect Identity and Theft on Your Mobile Devices is by Sue Waters.

ColAR is an extraordinary free app that TechCrunch just wrote about (see ColAR Uses Augmented Reality To Bring Your Kid’s Drawing To Life). It’s free, and lets you print out coloring pages from their site, color them in, look at them through the tablet app, and they come alive.

Watch video and prepare to be mesmerized:

I could see English Language Learners, and other students, color in the pictures and then create a story based on the augmented reality version.

A Practical Guide For Teachers Who Just Got iPads is from Edudemic.

TechCrunch writes about what sounds like a pretty easy tool for creating animations on an iPad: iPad Animation App Loop Captures The Fun Of Making Doodled Flipbooks.

For Schools Implementing iPads, the Importance of Being Patient is from Mindshift.

And if you want to read about a district that didn’t show any patience — or even common sense — in implementing an iPad program, read about what is happening in Los Angeles.

The Wider Image looks like a great Ipad app for viewing slideshows about current events. You can read more about it at Richard Bryne’s blog

Creation Apps Used On The iPad is from iPaddiction.

ScreenChomp looks like a pretty easy video-creating app for the iPad.

Subtext looks like a could be a useful iPad app for students to annotate text.

19 Mind-Blowing Tricks Every iPhone And iPad User Should Know is a post from BuzzFeed that has a lot of helpful advice to iPhone and iPad users.

Here’s a quick and short one I made of my ELL students their vocabulary homework:

Questions Is A Video Q&A App That Wants You To Have Curious Micro-Conversations With Anyone is a TechCrunch post about an intriguing iPad app.

Storehouse looks like a neat “visual storytelling” app for the iPad.

Common Core in Action: Screencasting in the Fourth Grade Math Classroom is a useful post from Edutopia that shares screencasting tools for the iPad:

A screencasting app gives children the ability to create a video that shows them writing on their iPad screen and captures their voice as they solve a word problem.

How to Get Started with Microsoft Office on iPad is from Read Write Web.

Yakit and Yakit Kids are iPhone and iPad apps that let’s “any photo talk.”

Chatterpix is an iPad/iPhone app that lets you make pictures “talk.”

Apps That Rise to the Top: Tested and Approved By Teachers is from MindShift.

The Library of Congress has published a series of interactive ebooks:

The new Library of Congress Student Discovery Sets bring together historical artifacts and one-of-a-kind documents on a wide range of topics, from history to science to literature. Interactive tools let students zoom in for close examination, draw to highlight interesting details and make notes about what they discover.

The first six Student Discovery Sets are available now for the iPad, and can be downloaded for free on iBooks. These sets cover the U.S. Constitution, Symbols of the United States, Immigration, the Dust Bowl, the Harlem Renaissance, and Understanding the Cosmos.

The second resource is an app called FiftyThree – Mix. I’m on a waiting list to get access to it, but you can read about it at TechCrunch. You can also watch this video, though it isn’t very informative:

Richard Byrne wrote a post about a cool iPad app called Post-it Plus that lets you take photos of your physical Post-its and easily convert them virtual ones.

WriteReader looks like an intriguing iPad app. Here’s an Ed Week article about it, and a video:

Google Makes TeleStory & Toontastic Free for Everyone is by Jonathan Wylie.

Tips for Using iPads in the Classroom is from Edudemic.

ToonTastic is a neat free iPad app useful for ELLs.

Feedback is welcome.  And I hope people will continue to leave suggestions in the comments section of post.

If you found post useful, you might want to look at the over 800 other “The Best…” lists and consider subscribing to blog for free

The Best Resources For Helping Beginner ELLs Learn About Clothes

Terrible News: John Lewis Has Passed – Learn About His Life

How Much Is Technology REALLY Used In Your School?