The Best Resources On Japanese-American Internment In World War II 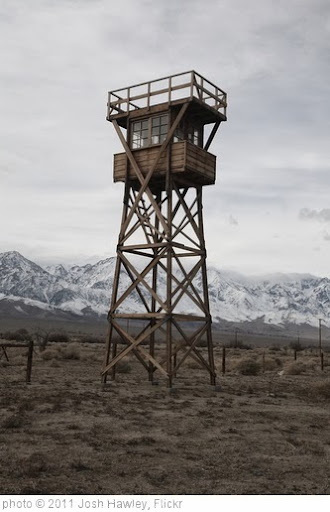 Fred Korematsu continued to speak up for civil rights throughout his life. He believed that “If you have the feeling that something is wrong, don’t be afraid to speak up.” That message remains alive in the mission and teachings of the Fred T. Korematsu Institute for Civil Rights and Education. In 2010, the state of California established January 30 as Fred Korematsu Day.

Also, the Day of Remembrance For The Japanese American Internment is on every February 19th, which marks the anniversary of the Executive Order by President Roosevelt authorizing that shameful event.

Here are my choices for The Best Resources On Japanese Internment In World War II:

The Fred Korematsu Institute has a full, and free, “teaching kit”.

Here is a link to my Internment Of Japanese-Americans lesson on my United States History class blog, which includes many resources.

Life In A Japanese Internment Camp is from The Smithsonian.

A More Perfect Union is another resource from The Smithsonian.

This is a link to a good History Channel video

The Akune brothers: Siblings on opposite sides of war is a new TED-Ed video and lesson.

Densho (a Japanese term meaning “to pass on to the next generation”) is an incredible website that offers an enormous amount of resources useful for teaching and learning about the internment of Japanese during World War II.

It’s apparently been around for quite awhile, but I just learned about it through an article in NBC News, Digital Project Aims to Preserve Stories of Incarcerated Japanese Americans.

This chart exposes the racism and paranoia behind Japanese internment is from Vox.

Minoru Yasui to Receive Presidential Medal of Freedom is from NBC News.

NPR has a piece on Minoru Yasui.

Seventy Years After Manzanar, the Stories of Incarceration Live On is from NBC News.

Ansel Adams’s Subversive Images of Japanese Internment is from The Atlantic.

For Japanese-Americans, Resistance to Syrian Refugees Recalls Long-Ago Fears is from The New York Times. Here’s an excerpt:

This article is from NBC News: Digital Teach-In Provides Internment Camp History Lessons That Schools Lack. It’s about a free new series of lessons being provided by the amazing Densho organization. You can sign up to have the lessons emailed to you, though I assume they will also be posted on the site.

A mini history lesson about the concentration camps on American soil. is from Upworthy.

I filmed Japanese-American internees reading letters to Muslim kids. Here’s why. is from The Washington Post.

Executive Order 9066, the ‘Single Act’ that Began Internment is from NBC News.

Righting a Wrong: Japanese Americans and World War II is from the National Museum of American History.

The Supreme Court ruled for President Trump’s travel ban. And the Japanese-American internment was a part of it:

Fred Korematsu’s daughter on yesterday’s Supreme Court ruling: “I feel the court all over again dishonored my father and what he stood for. To me what the Supreme Court did was substitute one injustice for another.” https://t.co/fwGJ9X7xqW

For not the first time in Trump’s presidency, Japanese internment camps are in the news. https://t.co/y2hVZKevAx

“The renunciation of Korematsu does say a good deal abt what the Court will not allow. It does place limits on exec power. As long as Korematsu was in place, there was danger tht this President, or a future one, wdnt scruple to use it.” Via @tnyCloseRead https://t.co/U84kPrddB2

On the left, the Korematsu discussion from today’s Trump v. Hawaii decision, and on the right, the concluding paragraphs of the Korematsu decision. pic.twitter.com/oGh3RjBjNG

For Survivors of Japanese Internment Camps, Court’s Korematsu Ruling Is ‘Bittersweet’ is from The NY Times.

The New York Times has just published an interactive on Japanese-American internment during World War II. It focuses on Mas Okui, who was imprisoned in Manzanar during the war and goes back to visit it every year.

I Know What Incarceration Does to Families. It Happened to Mine. is from The NY Times.

Then They Came is a San Francisco exhibition on Japanese-American internment. It is a substantial number of online educational materials.

The Smithsonian is offering a free eight-poster set on Japanese American Internment to teachers, along with a fairly detailed lesson guide on how to use them. I like both the posters and and accompanying curriculum. Put your request in here.

California To Officially Apologize To Japanese Americans Over Internment is from NPR.

The Language of Incarceration is from the Smithsonian.

“Where There’s an Injustice, We Cannot Afford to Forget It” is from Slate.

Eighty years ago today, an infamous presidential order forced thousands of Japanese Americans from their West Coast homes and into desolate incarceration camps during WWII. This week, I wrote about why this story needs to be remembered.https://t.co/yHjaL4FbXo via @seattletimes

On this Day of Remembrance of Japanese American Incarceration During World War II, we acknowledge the unjust incarceration of some 120,000 Japanese Americans – and reaffirm our commitment to Nidoto Nai Yoni, which translates to “Let It Not Happen Again.”https://t.co/WM4498Z0Ft

Prisoner in My Homeland is a role-playing simulation game about Japanese-American internment during World War II. It’s from Mission US, which has been justly criticized in the past for some of their role-playing games (you can read about those critiques at The Best Online Learning Simulation Games & Interactives — Help Me Find More). I have not played this particular game, but their most recent other ones have indicated they may have taken those criticisms to heart.

TEACHING JAPANESE AMERICAN INCARCERATION THROUGH COMICS & GRAPHIC NOVELS is from The Smithsonian.

There’s never been a complete list of the people of Japanese descent incarcerated during WWII.

So a team of scholars & volunteers scoured 10’s of 1000’s of historical documents to come up with all the names — a way to give them back their identities. https://t.co/kKMnCniz1Z

If you found this post useful, you might want to look at the 850 other “The Best…” lists and consider subscribing to this blog for free.