The Best Resources For Learning About What’s Happening In Syria 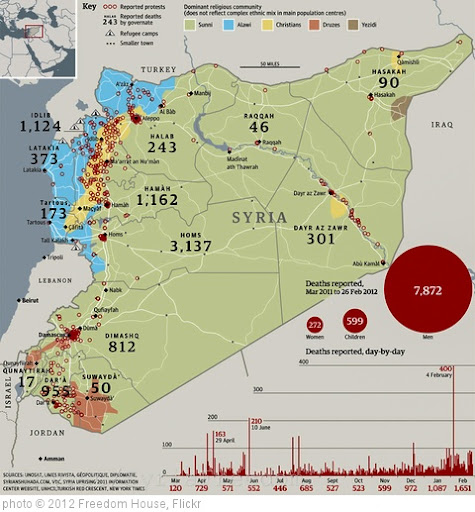 The past year has been one of increasing death and hardship for the people of Syria. I thought it would be useful if I started a “The Best…” list that might be useful for teachers and students. I’m starting it with just a few resources, but I’m sure I’ll be adding to it quickly. Feel free to offer suggestions.

You might also be interested in these other previous “The Best…” lists, some which include Syria resources:

The Best Sites For Learning About The Protests In Egypt

The Best Resources To See Who Might Fall Next After Mubarak…

The Best Resources For Learning About What’s Happening In Libya

The Best Resources On Chemical Weapons

Here are my choices for The Best Resources For Learning About What’s Happening In Syria:

Syria timeline: how the conflict has escalated – interactive is from The Guardian.

The Evolution Of Syria’s Conflict is a New York Times interactive.

Interactive: Timeline of Syria unrest is from Al Jazeera.

Interactive map and timeline: Syria is from The Financial Times.

The BBC has many resources on Syria.

What’s happening in Syria and will the violence end? is from The CBBC Newsround.

CNN has many Syria-related videos. Go here and click on “CNN Videos.”

Syria’s Year of Chaos: Photos of a Slow-Motion Civil War is a slideshow from TIME.

Syrian refugees is a photo gallery from The Boston Globe.

Deadly Stalemate in Syria is a photo gallery from The Atlantic.

Syrian troops attack suburb as cease-fire deadline approaches is a photo gallery from The Sacramento Bee.

Syria in the Spotlight is an interactive from The Wall Street Journal.

The Associated Press has an updated interactive.

Watching Syria’s War is a video presentation from The New York Times.

A Broader Look at the War Across Syria is a multimedia feature from The New York Times.

Syria: The very, very basics is from The Washington Post.

First Draft: My Theory Of Knowledge Lesson About Syria Next Monday — Help Me Make It Better

Syrian refugee numbers pass 2 million – interactive is from The Guardian.

Syria News Quiz is an interactive from The New York Times.

Understanding Syria: A visual guide to the latest crisis in the middle east is from USA .

Connecting Syria’s allies and enemies is an interactive from Al Jazeera.

Lesson Plan: An Attack on Syria- What Would You Do? is from the PBS News Hour.

Where would 7 million displaced Syrians fit? is an interesting — and sad — interactive from Al Jazeera.

The Associated Press has an updated interactive on the Syrian Civil War.

Syrian Journey: Choose your own route is a new BBC interactive where online users simulate — in an obviously detached way — the decisions a Syrian refugee has to make. It uses the framework of old-style “choose your own adventure” simulations.

You’ve probably already seen this heart-breaking video and image of the aftermath of a bombing in Aleppo, Syria.

You can read more about it at NPR, A Wounded Child In Aleppo, Silent And Still, Shocks The World.

Vox shared this terrible video of the destruction in Aleppo:

United Nations High Commissioner for Refugees (UNHCR) and Google have created an interactive Searching For Syria site providing an excellent overview of the Syrian War and its refugee crisis.  You can read more about it at TechCrunch.

Here’s a video about the site:

You can see the other “Best of…” lists here.

You can also subscribe to this blog for free here.