The Best Resources For The World Day Against Child Labor 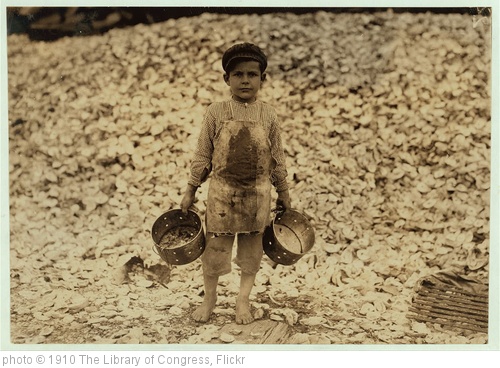 It’s new to me, but since 2002 the International Labour Organization of the United Nations has recognized June 12th as The World Day Against Child Labor.

Here are my choices for The Best Resources For The World Day Against Child Labor:

The International Labor Organization has lots of resources, including videos.

World Day Against Child Labor is a photo gallery from The Atlantic.

The photos that changed America’s child labor laws is from The Mail Online.

Over 10m children work as domestic labourers is from The BBC.

Child labour falls by a third to 168 million, says ILO is from The Guardian.

A nice cup of tea … and other products that may be linked to child labour – in pictures is from The Guardian.

Giving Voice to Child Laborers Through Monologues is a lesson plan from Read Write Think.

Nobel Peace Prize Winner’s Message To America: ‘All Children Are Our Children’ is from NPR.

I’ve written a lot about the Stanford History Group (it’s on The Best Resources For Using Primary Sources).  They’ve released a new lesson plan on Child Labor. Here’s how they describe it:

Lewis Hine shot hundreds of photographs that exposed the working conditions facing thousands of child laborers in the first two decades of the twentieth century. His powerful images shed light on a world largely hidden from most middle-class Americans and influenced public debate about child labor laws. This lesson asks students to think critically about Hine’s photographs and their usefulness as evidence of the past.

New Numbers On Child Labor Are Not Encouraging is from NPR.

UN: 1 in 10 Children Globally Is Victim of Child Labor is from Voice Of America.