One of the most important purposes of public education, I believe, is to prepare students to participate in democratic public life. There are many aspects of this kind of activity, including voting.

It does not appear that Florida’s Governor Scott shares my belief in wanting to promote this kind of democratic engagement, however.

He is having registered voters investigated to see if they are U.S. citizens, and is being sued by the United States Department of Justice (see NPR’s story, Justice Department Sues Florida As Voter Battle Intensifies).

His initiative is clearly a thinly veiled effort to discourage Latino voting, as The Daily Show’s episode from last night demonstrates (if you’re reading this on an RSS Readers you may have to click through to see the embedded video):

This reminds me of an incident in my community organizing career when then-California Secretary of State Bill Jones was unhappy with Congresswoman’s Sanchez election victory and began a similar search of voter rolls. Five hundred of our members, led by thirty African-American, Latino, Asia, and white clergy, marched to his office to present him with what we called The Bull Connor Award For Promoting Ethnic Minority Voter Participation. It was a well-produced placard with this image of Bull Connor’s police in Birmingham, Alabama using police dogs to prevent African Americans from registering to vote (among other “offenses”): 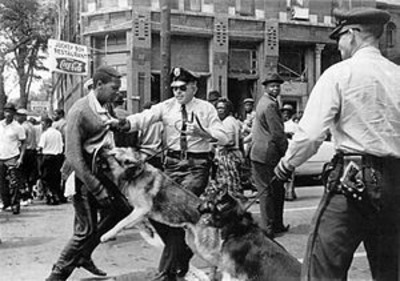 He, however, was not aware of the irony, and thought he was getting a serious award. Five minutes before he was scheduled to meet with us, however, one of his staffpeople figured out what was going on and canceled the ceremony.

Video: “The Year Of The Rooster: Things You Didn’t Know”