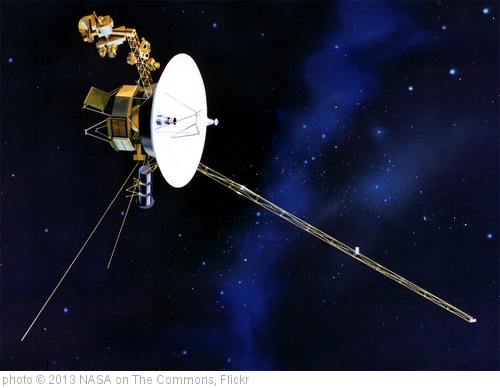 The Voyager 1 Spacecraft, launched in 1977, is nearing a departure from our solar system.

I’m adding this list to A Collection Of “The Best…” Lists On Space.

Here are my choices for The Best Sites For Learning About Voyager 1 & Its Departure From Our Solar System:

NASA’s interactive on the contents of the “Golden Record” carried by Voyager for other intelligent life to see and listen to is my favorite part of that site.

Humanity escapes the solar system: Voyager 1 signals that it has reached the edge of interstellar space – 11 billion miles away is from The Mail Online.

Graphic: Voyager 1 space probe exits the solar system is from The National Post.

The BBC has a special page on Voyager 1.

Here are some embedded videos (if you’re reading this on an RSS Reader, you might have to click through to see them):

Voyager 1 Bids Farewell to the Solar System is from NPR.

Voyager 1 Turns 35, Will Soon Be the First Man-Made Object to Leave the Solar System is from The Atlantic.

Voyager: a space odyssey – in pictures is from The Guardian.

Voyager’s epic journey: How long would it take you? is a neat interactive from The BBC.

NASA’s Voyager 1 Explores Final Frontier of Our ‘Solar Bubble’ is from NASA.

The Atlantic shares what Voyager heard as it left our solar system.

Voyager’s epic journey: How long would it take you? is a neat interactive from The BBC.

Exiting the Solar System and Fulfilling a Dream is from The New York Times and includes a lot of multimedia features.

Voyager 1 finally crosses into interstellar space is from CBS News.

“This film showcases the images and sounds of the solar system through the real photographs and plasma frequencies received by the voyager crafts”:

Voyagers from Santiago Menghini on Vimeo.

Voyager’s 40th Anniversary is a photo gallery from The Atlantic.

Great Lesson Idea – What Would You Put On Voyager’s “Golden Record”?

The Best Sources For Interactive Infographics