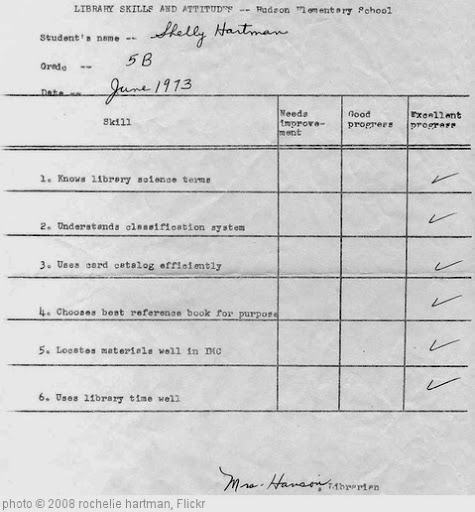 This is the last — for now, at least — “The Best…” list in my student assessment series (though, of course, I’ll be adding new resources to each of them on an ongoing basis).

Here are the previous posts in the series:

The Best Resources For Learning About Formative Assessment

The Best Resources For Learning About Effective Student & Teacher Assessments

This is sort of a “catch-all” post for various posts I’ve made on student assessment that don’t quite fit into the other lists, but the emphasis is on what we all have to do in our classrooms — give students grades:

Response: Several Kinds Of Grading Systems is one of my Education Week Teacher posts.

‘The Grading System We Need to Have’ is Part Two in that Ed Week series.

“Instead of seeing students as Far Below Basic or Advanced, we see them as learners”

I have some issues with the ASCD article, Starting the Conversation About Grading, but the “Which Do You Believe?” chart at the end is useful.

Finding Your Grading Compass is by Carol Ann Tomlinson.

Five Obstacles to Grading Reform is by Thomas R. Guskey.

Why Teachers Secretly Hate Grading Papers is from The Atlantic.

The Case Against Grades is from Slate.

Increasing Student Engagement By Grading Backwards is from TeachThought. I’m not that thrilled with the idea that it suggests — I think it promotes extrinsic motivation even more than the typical grading system. However, it is an innovative concept.

5 Point Free Assessment Strategies is from A Fine Balance.

The Spirit of SBG is by Frank Noschese.

It’s Time to Stop Averaging Grades is by Rick Wormeli.

RT @TheJLV: Students at Hudson have a three part grading system. In thirds: self, teachers, peers. They were pretty accurate across. #educon

“Dissecting Grades: What Do They Mean, What Are They Worth?” Is My New BAM! Radio Program

What’s in a Grade? is from Ed Week.

Why Girls Tend to Get Better Grades Than Boys Do is a report in the Atlantic about some new research, and actions taken in response to it. I don’t think it shares anything that most teachers don’t know already, but the actions are interesting — and it can’t hurt to have research to back up what you know if you want to do something about it.

Here Are Forms My Students Are Using To Evaluate Themselves & Me

When thinking about our philosophy on grading we need to focus on the top 3 reasons, NOT the bottom 3. @rickwormeli2 pic.twitter.com/VSkyExVYWU

Don’t Give a Pass to Failed Grading Systems is by David B. Cohen.

Why Schools Are Ditching A’s, B’s, and C’s for Greens, Yellows, and Reds is from Slate.

Missing Assignments–and the Real World is by Nancy Flanagan.

Here’s an important “letter to the editor” by Rick Wormeli on grading.

Shifting the Grading Mindset Starts With Our Words is by Starr Sackstein.

Grading: Why You Should Trust Your Judgment is from ASCD Educational Leadership.

Making Grading Practices ‘Specific, Constructive & Timely’ is the headline of one of my Education Week Teacher columns.

Schools are shifting toward no-zero grading policies is from The Washington Post.

Now this is a reflection-Ask students to justify their grade & prove why they did a good job-see what they say! 😄 #edchat #formativechat pic.twitter.com/aQVaImNfAc

Don’t Get Rid of Grades. Change Their Meaning & Consequences! appeared in Ed Week.

Douglas Reeves Takes On Five Myths About Grading is from The International Educator.

@rickwormeli2 These should be found in every classroom. Yes – even middle and high school classes!!! pic.twitter.com/FDHPSYKvar

This new video on Standards Based Grading is by Rick Wormeli:

How to Create a Gradeless Math Classroom in a School That Requires Grades is from Mr. Burnett.

The Value Of Student “Opinion” Surveys

Metacognitive Reflection at Report Card Time is from Edutopia.

DO WE GIVE A ZERO OR 50% FOR WORK NOT TURNED-IN? HERE ARE SOME USEFUL COMMENTARIES

Here’s an infographic on motivation and grading.

Six Baby Steps Toward Fair and Valid Grading is by Cheryl Mizerny and appeared at Middleweb.

Grades Versus Comments: What Does the Research Really Tell Us? is from Ed Week.

Students Should Not Believe a Grade ‘Defines Who They Currently Are’ is a three-part series at my Ed Week Teacher column.

Accurate and Equitable Grading is by Joe Feldman.

ASCD’s Educational Leadership has a special issue on grading.  Here are several articles from that issue that I’m adding to The Best Resources On Grading Practices:

Turn & Talk / “Antiracist” Grading Starts with You is from Cornelius Minor.

Taking the Stress Out of Grading is by Joe Feldman.

Research Matters / Grading to Encourage Re-Learning is by Bryan Goodwin and Kris Rouleau.

Two Useful Resources To Use In A Discussion About Grading

Grades versus comments: Research on student feedback is by Thomas Guskey.

Grades Have Huge Impact, But Are They Effective? is from MindShift.

Learning From Failures: Lessons From Unsuccessful Grading Reform Initiatives is by Thomas Guskey.

Why some California school districts are changing how students earn grades is from EdSource.

Q: Isn’t a 50% minimum grade just giving lazy students something for nothing?

A: Minimum #grading aims to repair an unfair & inaccurate percentage scale by condensing the failure range from 0-59% to 50-59%–equal to the intervals of higher letter grades.

Getting Started With Standards-Based Grading is from Edutopia.

When is a number not a number? is from Grading For Growth.

Been diving into research about grades, really much less there than I thought there woudl be. Here is what I've found so far: https://t.co/ZVhQGTUNsB

Feedback, including suggestions of additional resources, is welcome.

Thousands Of New Books, Films & Songs Entered The Public Domain This Week – Here’s How To Access Them

The Best Online Resources For Learning About The Gettysburg Address