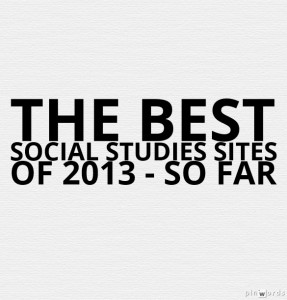 Here are my choices for The Best Social Studies Sites Of 2013 — So Far:

We open up each school year in our ninth-grade English classes by doing a unit on natural disasters.  The History Channel has a new site called “Perfect Storms” that not only lets you “see” famous disasters in history, but also lets you create one at an address of your choosing. Nothing like typing in the address of your school and seeing what happens through a computer projector to get students’ attention!

The Knotted Line is a pretty cool interactive on the struggle for freedom in the United States over the years. It also provides opportunities for people to leave comments in answering questions.

TIME Magazine has an ongoing series of short TIME Explains videos on current events. Here’s a link to most of them.

The Great Divide: Global income inequality and its cost is a project by a group called The Global Post, done in partnership with The Pulitzer Center with support from The Ford Foundation.

Here’s how they introduce the project:

Income inequality is surging, and there are few countries where it is rising faster than the United States. The distance between rich and poor is greater in America than nearly all other developed countries, making the US a leader in a trend that economists warn has dire consequences. GlobalPost sets out on a reporting journey to get at the ‘ground truth’ of inequality through the lenses of education, race, immigration, health care, government, labor and natural resources. The hope is to hold a mirror up to the US to see how it compares to countries around the world.

I’m embedding the interactive below, but there’s much, much more to the site. I’m adding it to The Best Resources About Wealth & Income Inequality.

The Great Divide: Global income inequality and its cost infographic

It’s a little hard to describe From Cave Paintings to the Internet.  Here’s what Google Maps Mania has to say about it:

an amazing online project to document the history of information and media. The project has a huge scope, starting with entries from 2,500,000 BCE right up to the modern day.

The project also provides a great Google Maps based interface to explore the records geographically and thematically. The map allows the user to select from a large number of themes, from archaeology to writing and palaeography. The entries can also be explored by historical era and by regions.

Just check it out…

Reading Like A Historian is an impressive collection of almost ninety U.S. and World History lessons from The Stanford History Education Group. Here’s how they describe the lessons:

The Reading Like a Historian curriculum engages students in historical inquiry. Each lesson revolves around a central historical question and features sets of primary documents designed for groups of students with diverse reading skills and abilities.

This curriculum teaches students how to investigate historical questions by employing reading strategies such as sourcing, contextualizing, corroborating, and close reading. Instead of memorizing historical facts, students evaluate the trustworthiness of multiple perspectives on historical issues. They learn to make historical claims backed by documentary evidence.

They look good to me. You have to register to gain access to them (though you can get a “quick view” of them without registering), but registering is a pretty painless process. The same organization also sponsors Beyond The Bubble, a history assessment site that I have previously posted about…

Rich Blocks, Poor Blocks is a simple tool that lets you determine the median income for every census tract in the United States just by typing in an address.

The Best Video Clips On Goal-Setting — Help Me Find More

More Resources On The Musical “Hamilton”