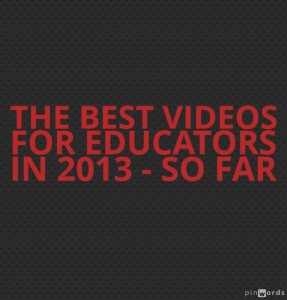 Here’s the latest in my mid-year“The Best…” posts….

And you might also want to see The Best Funny Videos Showing The Importance Of Being Bilingual — Part One ; The Best Videos Illustrating Qualities Of A Successful Language Learner and The Best Fun Videos About Books & Reading.

You might also want to check out The Best Video Collections For Educators.

Here are my choices for The Best Videos For Educators In 2013 – So Far:

Jason Flom shared this great video on the importance of making mistakes. I’m adding it to The Best Posts, Articles & Videos About Learning From Mistakes & Failures.

This demonstrates both the disadvantages of extrinsic motivation and the importance of helping our students develop creativity. I’m adding it to The Best Posts & Articles On “Motivating” Students and to The Best Sources Of Advice On Helping Students Strengthen & Develop Their Creativity:

Here’s a cute video that would be a fun introduction to the lesson on self-control in my book, Helping Students Motivate Themselves (and it could be used with any of the other ideas I share in The Best Posts About Helping Students Develop Their Capacity For Self-Control).

A willingness to take risks is an important quality of a language learner, which is why I’m adding this video to The Best Videos Illustrating Qualities Of A Successful Language Learner:

Story, Imagery, & the Art of 21st Century Presentation is a very good video of Garr Reynolds on presentation skills. I’m adding it to The Best Digital (& Non-Digital) Storytelling Resources.

Dan Pink has posted a nice and short video demonstrating the importance of asking good questions.

You may have heard about the late David Foster Wallace’s amazing commencement address from several years ago at Kenyon College. A video, using his audio, was unveiled on the Web, and has since been seen millions of times. Here’s the video (you can read the transcript here). Here are previous posts where I’ve also highlighted particularly notable commencement addresses:

This TED Talk video from Rita Pierson on “Every Kid Needs A Champion” is a great one. I had never heard of Rita Pierson before, but she makes great points. I wonder how and why she got connected to Ruby Payne? (see The Best Critiques Of Ruby Payne).

I’m adding the video to The Best Resources On The Importance Of Building Positive Relationships With Students.

This is a great entertaining video, and it got me wondering if it could be a model for some class projects — would it make sense for students to create similar videos demonstrating the historical transitions in, let’s say, the rule of law, or how children were treated (or, as one reader suggested, changing scientific beliefs)? You’d want to be very, very careful (and I’d probably avoid it) with using it to examine racial and gender attitudes, but there may very well be other attitudes that would be worth examining. At the very least, the video will offer a few minutes of enjoyable entertainment:

Here’s another short video that would be great to teach “perception” in IB Theory of Knowledge classes. Thanks to Michelle Henry for the tip:

The Anti-Defamation League has launched an “Imagine a World Without Hate” video and action campaign with the posting of this pretty amazing video. It can be used in many ways, including as part of a “what if?” history lesson. That’s why I’m adding it to The Best Resources For Teaching “What If?” History Lessons:

I’m adding this excellent video on how African men are stereotyped in Hollywood movies to The Best Geography Sites For Learning About Africa. It’ll be a great way to also get my ESL students to start talking about how they feel their cultures have also been stereotyped.

The wonderful StoryCorps stories on NPR are great pieces to read and listen to on the radio. They also have converted a number of them into short video animations, and many of them (though not the one I’ve embedded below) are closed-captioned.

Here is one of my favorites — with the late, great Studs Terkel:

I’m adding this video to The Best Resources About Wealth & Income Inequality:

The well-regarded documentary The Finland Phenomenon is now online for free and is embedded below. I learned about its availability via a tweet by Pasi Sahlberg, which also included a radio interview. I’m adding it to The Best Resources To Learn About Finland’s Education System.

The Gates Foundation  released a new one of Hans Rosling’s “magic” world data videos (you can see his previous ones I’ve posted here). Check it out:

The eagle in this video certainly illustrates an example of perseverance. I’m adding it to The Best Videos Illustrating Qualities Of A Successful Language Learner:

I’m adding this video to The Best Resources On Helping Our Students Develop A “Growth Mindset”:

NASA released this video showing temperature changes in the world since 1880 and including 2012 — it’s an updated version of one they’ve released in previous years. I’m adding it to The Best Sites To Learn About Climate Change.

What A Great Video To Show The Importance Of Modeling & Support:

Dan Pink was interviewed on CBS, and it really gets at some key elements of motivation and goal-setting. There’s nothing new there for people familiar with his work, but it’s a great piece to show to colleagues and to students. I’ve embedded it below, though am not sure if it will show-up in an RSS Reader:

Eduardo Briceño is the Co-Founder, with Dr. Carol Dweck, of Mindset Works:

I’m adding it to The Best Resources On Helping Our Students Develop A “Growth Mindset.”

I wouldn’t put this next video in the same class as the other ones on this list, but I think readers might still find it useful. Eye On Education, the publisher of my new books on student motivation, Helping Students Motivate Themselves and Self-Driven Learning, have just posted a short video clip from a webinar I did for them.

In it, I share three strategies that can help students develop intrinsic motivation:

If you found this post useful, you might want to look at the 1,100 other “The Best…” lists and consider subscribing to this blog for free.