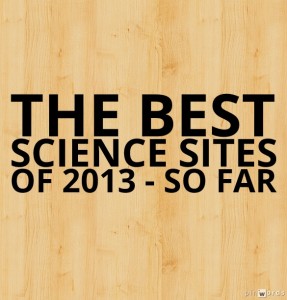 Here are my choices for The Best Science Sites Of 2013 — So Far (not in any order of preference):

Wonderground is a game from General Electric where you visit various cities in The United States and are given “missions” to explore them and make discoveries related to science and history. It would be accessible to high Intermediate English Language Learners and others, and it’s very engaging.

Here Is Today is a cool interactive infographic.

I learned about it from Information Aesthetics, who described it like this:

Ranging from one day to one eon, and framing the time periods different kinds of species emerged on Earth, the timeline ribbon acts like a dynamic stacked bar chart that enables easy comparison.
It’s Okay To Be Smart is a new PBS Science Show On YouTube that looks like it may have some potential. It’s hosted by biologist Joe Hanson. He also has a supporting blog for the show.

The Guardian has  published an interactive infographic that lets you see the temperature change over the past one hundred years in most locations in the world. Just type in your city and country and, voila, you see it graphed for your location.

NASA released this video showing temperature changes in the world since 1880 and including 2012 — it’s an updated version of one they’ve released in previous years.

The Best Resources For Helping Beginner ELLs Learn About Holidays

Learning About Scientific Discovery In Theory Of Knowledge Class