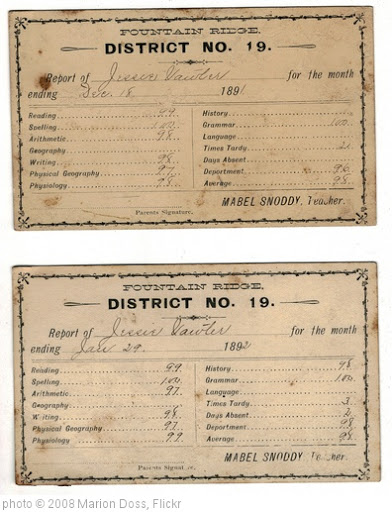 Our school year ended last Thursday, and I’m spending some time today reviewing anonymous student evaluations of my classes (you might also be interested in The Best Posts On Students Evaluating Classes (And Teachers) ).

I’m starting with what is always my most challenging class — a two hour ninth-grade English class. And, I’ve got to say, I think this class was the most challenging I’ve ever had (except for my first year of teaching when I had a self-contained class of retained seven-graders who had me for the entire day). I’ll be posting the results from my other classes soon.

As usual, though, this class is also the one where I learn the most about being a better teacher.

Here’s the evaluation form I use.  I usually use a slightly different one for the second semester, but inadvertently copied the first semester version.

Here are a few “highlights,” along with my comments:

* In this class I learned:

Seventy percent said “a lot.” That’s a decrease from the ninety percent that circled this answer at the end of the first semester but, nevertheless, it was still a pleasant surprise to have this high a rating in what I consider the most important question. A number of my students faced significant challenges during the second semester that they did not have during the first semester, and we had some new students transfer into the class.

I think it would have had a positive impact overall in the class if I had done more of the life skills lessons  in my books. However, those take a little more energy to teach than our regular curriculum (which is of very high-quality). Even though I knew in the long-term it would have been better for my students and for me, it was hard to find the energy to do all of them (though I certainly did several) in the face of coping with daily classroom challenges.  I spent many a prep period (my free period) having “walk-and-talks” with students from this class — pulling them out of another class with that teacher’s permission to have a low-key relationship-building conversation.  And I spent a lot of time talking with parents.

That’s not a complaint — just an explanation. These kinds of interventions just go with the territory.

* As a teacher, I think Mr. Ferlazzo is:

* Did you feel that Mr. Ferlazzo was concerned about what was happening in your life?

Half said yes and half said no. Again, a lower-rating than the first semester.  As is usually the case, I spent a lot of time with students facing challenges and little with the ones doing okay.  Though the evaluations were anonymous, I bet I know who said yes and who said no.

Two-thirds said “some of the time” and one-third said “a lot of the time.” Again, a reduced rating from the first semester. I learned about a useful metaphor pretty late in the semester that I think will be helpful to me in the future.

* Would you want to take another class taught by Mr. Ferlazzo?

Again, the results here were the same as at the end of the first semester — half said yes and half said no. It was puzzling to me then, but based on the challenges of the second semester, I’ll take it now.

So, in summary, these end-of-year ratings were generally lower than in previous years’ classes and, in fact, lower that my first semester ratings. However, I’m not beating myself up about it , especially since the responses to the first question — the most important one — were satisfactory in my eyes.

I think it may raise institutional questions about student placement but, more importantly for me, they push me to reflect on what I could have done – and will do – differently.

Clearly, I need to place a higher priority on teaching all of the life skills lessons I usually teach.

In the past, I’ve also placed a higher priority on ensuring that students in this double-block class have mentors — juniors and seniors who can provide some guidance. Though some of my students did have these mentors, I did not ensure that they all had them, and didn’t really monitor the ones who did. It would have been easy for me to do so since most of the mentors were students in my IB Theory of Knowledge class. That’s another area for me to keep in mind.

Though I consider myself generally to be a pretty patient person, I need to develop a deeper toolbox for myself to be able to practice it even more.

I will also be interested in seeing the state test results of my students in August. I’m a believer in being data-informed and not being data-driven, which means the scores will just be one more piece of information — just like these evaluation results and my own reflections. But, especially since it was such a challenging year, the more information I have to consider, the better….

Look for similar posts about my other classes.  I know they will be far more positive.  I wonder, though, if I’ll learn as much from them about how I can be a better teacher?