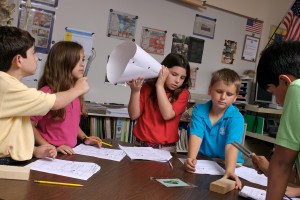 Something must be in the air today — first there was the new study by Carol Dweck, and now another intriguing study — this one by University of Pittsburgh researchers on student engagement.

Unfortunately, unlike Professor Dweck’s research, which was available for free, the Pittsburgh study is behind a paywall. I did go ahead and purchase School context, achievement motivation, and academic engagement: A longitudinal study of school engagement using a multidimensional perspective. However, I think the free report summary does a good job of laying-out its key points.

For what it’s worth, though, with a couple of important exceptions, I don’t think you’ll find much new in the report that you can’t find in The Best Posts & Articles On Student Engagement or The Best Posts On Motivating Students.

However, there are those two exceptions…

The first one is a relatively obvious point about choice, but one that I think is easy to overlook. Here’s what the report says:

Contrary to our hypotheses, however, perceived provision of choice did not predict students’ subjective task valuing of learning at school, nor did it predict their academic self-concept (Hypothesis 1b). There is evidence that the benefits of choice-provision for student motivation are likely to be limited if the choices involve tasks that are not deemed interesting or relevant to a student’s personal goals and interests (Assor et al., 2002). Opportunities for decision making or freedom of action are less important than the extent to which the decision making and action opportunities available reflect personal goals, interests, and values (Deci & Ryan, 2000). It is possible that decision-making opportunities do not effectively support student autonomy in the case that no relevance to personal goals or interests is detected. In order to make choice and freedom of action motivational, students should be provided with options to engage in schoolwork that are relevant to personal goals and interests (Flowerday & Schraw, 2003; Katz & Assor, 2006).

In other words, student choice is not a magic bullet.

Though it’s not a brilliant revelation, it is nevertheless an important reminder to all of us.

Their other key point, I think, is more important.

They characterize “student engagement” as a combination of “behavioral, emotional, and cognitive engagement.” The way they measured it is through a student survey evaluating each of the three components with specific questions where they had respondents rate on a five point scale. Though they don’t include the entire survey in the paper, they do provide examples:

Behavioral engagement — “How often do you participate in class discussion actively?”

Emotional engagement — “I feel excited by the work in school.”

Cognitive engagement — “How often do you try to relate what you are studying to other things you know about?”

With those examples, and a couple of others they include in their paper, it would be fairly easy for teacher to create their own survey measuring those three components of student engagement (I’ll be developing one that I’ll post on this blog in the future). It seems to me that those kinds of questions could be an important evaluative tool as a companion to the kind of teacher/class evaluation I posted about earlier today. Answers could reveal some pretty critical feedback for educators.