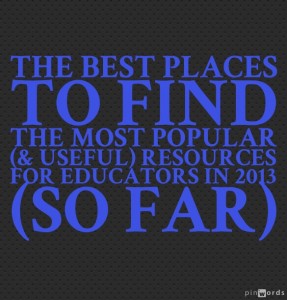 I periodically post “most popular” lists of websites (and books) that I think educators might find useful. Of course, there are a number of ways to gauge “popularity.” I just view these lists as opportunities to check-out some new sites, and find it interesting to see which ones might be particularly “popular.”

I’ve made quite a few posts that fit into this category, and thought I’d highlight which ones I thought were the best and most useful for educators.

Here are my choices for The Best Places To Find The Most Popular (& Useful) Resources For Educators — 2013 (So Far):

Google has just unveiled “Top Charts,” which show the top things that people are searching for in multiple categories.

Here are a couple of examples:

You can read more about it at TechCrunch.

The YouTube Trends Map shows which videos are popular in different regions of the United States and in many countries of the world, along with further filtering by the age of viewers. Thanks to Flowing Data for the tip.

TED-ED is the K-12 video “arm” for the famous TED Talks, and they’ve recently published a list of their “Top 10 most popular TED-Ed lessons!”

USC Rossier Online, associated with the University of Southern California,  unveiled a rating system for education blogs that they call The Teach 100.

Another organization just published their own updated list of the “top 100 influential education blogs,” ranked by their “Onalytica Influence Index.”

Five years ago, Flickr and the Library Of Congress joined forces to create Flickr Commons — a compilation of public domain photographs. Since that time, other institutions have also joined in. They just released a collection of their most viewed photos during that time, and it’s pretty neat.

Here are various presentations of them that have appeared throughout the Web:

Flickr celebrates Commons’ fifth year and 250k photos with galleries of most viewed pics is from The Next Web.

Flickr Commons’ most-viewed or most-favourited photos of the last five years is a slideshow from The Telegraph.

The pictures we love best: Flickr celebrates fifth birthday with its most viewed images is from The Mail Online.