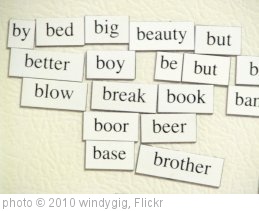 As far as I can tell — and I hope readers will let me know if I’m wrong — it’s been generally accepted that a child’s success in school can be directly connected to the number of words they hear at home. In fact, the city of Providence was recently awarded a $5 million grant by New York Mayor Bloomberg’s foundation to connect high-tech equipment to children’s clothing for an experiment based on this belief (see Could Providence’s Word Counting Project Be A “Boondoggle” As Well As Being Creepy?).

Now, a new study by psychologists at The University of Pennsylvania seem to question this generally accepted believe. It’s quality, not quantity, that matters:

Here are some excerpts from their summary:

A new study by psychologists at the University of Pennsylvania now shows that early vocabulary improvement is likely to have more to do with the “quality” of the interactions in which the words are used rather than the sheer quantity of speech directed at young children. Moreover, the study shows that, unlike quantity, the quality of these interactions is not related to the parents’ socioeconomic status….

…“We see that the more an environment maximizes the ‘here and nowness’ of speech, such as when a parent is gesturing or looking at the object in question, the more likely it is that an interaction will be highly informative,” Gleitman said. “And it turns out this is surprisingly hard to do; only 7 percent of the examples were able to be guessed correctly by more than half of the adults we showed them to.”

“This means that some parents are providing 10 times as much highly informative learning instances as others,” Gleitman said.

This study identifies a critical nuance in how this issue is considered, and being data-driven does not seem to like nuances….

(Here’s an L.A. Times article on the same study)

And here’s an article from TIME on the study

Another Study Finds That Poverty Causes Cognitive Challenges, Not The Other Way Around

Here Is My Education-Related Suez Boat Meme (As Well As Others) – Plus How To Make Your Own!