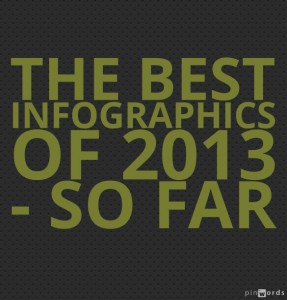 Infographics show data in a visual way, and make the information much more accessible for English Language Learners — and everybody else. Interactive infographics are especially engaging because they allow users to customize the data they see. You’ll find both kinds in this list.

The Best Sources For Interactive Infographics.

The Best Resources For Creating Infographics

The Best Resources For Learning About “Word Clouds”

Not “The Best,” But “A List” Of Mindmapping, Flow Chart Tools, & Graphic Organizers

Here are my choices for The Best Infographics Of 2013 – So Far:

How We Spend Our Time Now, in Three (Really Big) Graphs is from The Atlantic.

13 Reasons Why Your Brain Craves Infographics is a well-done interactive infographic and includes multiple references and links to them.  Much of the cited research can be applied to the effectiveness of any kind of visual support given information, and not just to infographics.

“5 Tools For Creating Your Own Infographics”

Here’s a graph they reproduced: 22 Maps That Show How Americans Speak English Totally Differently From Each Other is a fun and informative sampling from an extensive new series of visualizations that have just been published.

I’m adding this infographic to The Best Websites For Students Exploring Jobs & Careers:

The state of U.S. immigration is a very well-done and informative interactive infographic from The Washington Post.

What Career Should I Choose? is an interactive that lets you pick a career and then shows you how it ranks in “potential salary, competition and market stability.” Obviously, other criteria need to be taken into account, but it still could be useful.

I’m adding it to The Best Websites For Students Exploring Jobs & Careers.

What Career Should I Choose? [Interactive Graph] infographic by Rasmussen_College.

Why Are Students Not Finishing School is an interactive infographic from GOOD Magazine. Even though it doesn’t quite fit, I’m adding this infographic to The Best Online Carbon Calculators:

My Environmental Footprint infographic by VisualApogee.

Seven Steps To A Perfect Story is a very useful infographic.

This infographic provides a pretty decent outline for making good infographics. I’m adding it to The Best Resources For Creating Infographics:

How To Create An Awesome Infographic

This is a pretty interesting interactive infographic. Because it’s so historical, I’m adding it to a somewhat odd list I’ve posted, The Best Resources To See Connections (or Disconnections) In The World Before & After The Internet:

Here Is Today is a cool interactive infographic.  I learned about it from Information Aesthetics, who described it like this: Ranging from one day to one eon, and framing the time periods different kinds of species emerged on Earth, the timeline ribbon acts like a dynamic stacked bar chart that enables easy comparison. This sure is a very interesting interactive infographic:

Teachers needs around the world infographic by UNESCO Institute for statistics.

How Parents Around the World Describe Their Children, in Charts is a fascinating report of an the results from an international survey.

The info is fascinating, and the charts make the results very accessible to students and teachers alike.

The Atlantic allows the charts to be embedded in blogs and websites, which I’ve done below. But it’s worth reading their post for commentary.

I’m adding this to The Best Sites For Learning About The World’s Different Cultures.

I’m adding this to The Best Sites That Show Statistics By Reducing The World & The U.S. To 100 People:

The World as 100 People infographic by JackHagley.

Global Slavery, By The Numbers

Disease and death around the world visualised is from The Guardian. I’m adding it to The Best Sites For Learning About The World’s Different Cultures.

Where Americans go to work is from The Washington Post, and shows you the average commuting time and distance for workers in every county in the United States.

Forget international test score comparisons, UNESCO’s “Mind The Gap” interactive compares literacy rates by gender around the world, along with years of schooling. It’s well-done and pretty interesting and, at times, depressing. I’m adding it to The Best Sites For Learning About The World’s Different Cultures.

Mind the gap infographic by UNESCO Institute for statistics.
The Guardian has just published an interactive infographic that lets you see the temperature change over the past one hundred years in most locations in the world. Just type in your city and country and, voila, you see it graphed for your location.

The Best Resources For Learning About School Dress Codes