Quote Of The Day: Hannah Arendt & The Origin Of Evil

I’ve previously posted about how much I admire the work of Hannah Arendt, and how I’ve used it to help my students discover the importance of self-reflection (it’s also made-to-order for IB Theory of Knowledge classes). Her work was also very important to me during my nineteen year career as a community organizer and our wariness, which I continue to have, of any and all ideologues (particularly their unwillingness to compromise).

Today’s New York Times has an exceptional essay on her work. Here’s an excerpt: 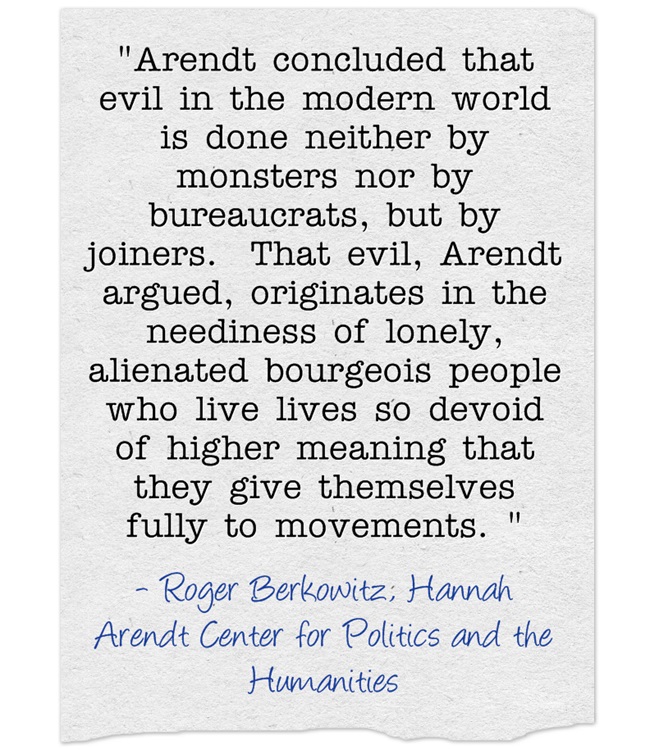 Here’s another portion that elaborates on the point:

That evil, Arendt argued, originates in the neediness of lonely, alienated bourgeois people who live lives so devoid of higher meaning that they give themselves fully to movements. It is the meaning Eichmann finds as part of the Nazi movement that leads him to do anything and sacrifice everything. Such joiners are not stupid; they are not robots. But they are thoughtless in the sense that they abandon their independence, their capacity to think for themselves, and instead commit themselves absolutely to the fictional truth of the movement. It is futile to reason with them. They inhabit an echo chamber, having no interest in learning what others believe.

It seems to me to speak to many situations in our public life today. What do you think?

Think About This The Next Time You Ask “Why?” Or Are Asked “Why?”

Quote Of The Day: The Benefits Of Collaboration