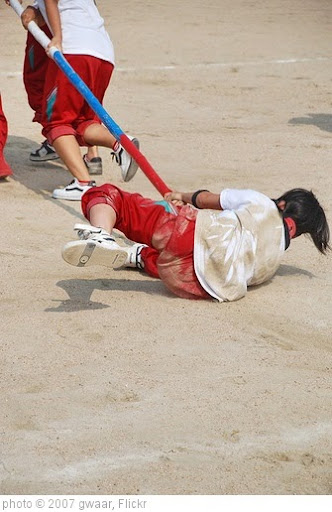 I have a lesson plan in Helping Student Motivate Themselves about grit, and I also have related videos in The Best Resources For Learning About The Importance Of “Grit”, as well as a number of fun “grit” videos in The Best Videos Illustrating Qualities Of A Successful Language Learner.

However, I wanted to find a few more, and thought that some athletic-related ones would be helpful. So I’ve found a few (along with Paul Tough clip I’m adding at the end). I hope readers will suggest more.

Here are two versions of the famous clip showing Derek Redmond at the Barcelona Olympic Games. The first one is very well done. However, it has a soundtrack to the song “You Raise Me Up,” which is sung in many different situations, including in churches. In case people were concerned about showing a video with that sound track, the second video doesn’t contain it:

Of course, there’s the last race in the film, Cool Runnings:

I’m not sure where or when the race in this next video took place:

Students may not recognize a number of examples cited in this video, but it’s still worthwhile:

And then there’s the Paul Tough clip:

You may have seen the amazing performance by U.S. skater Jeremy Abbott at the Sochi Olympics where he took a terrible fall but then recovered to finish very strongly.

Digg describes this next video as “Watch A 2-Year-Old Amputee Learn To Walk Before Your Eyes”:

Iris suggests this one — it highlights grit as focusing on long-term success (the following two do so, also):

Grit from Trent Jaklitsch on Vimeo.

What other athletic feats of grit would you recommend?

Video: “The 10 Most Important Gadgets Of The Decade”

New Crash Course Video: “What History Was, Is, and Will Be”