What In The World Is Rahm Emanuel Thinking? 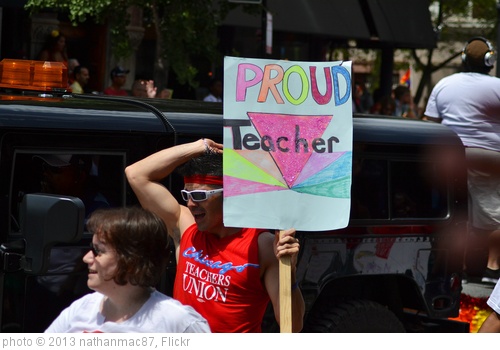 Nationally recognized teacher @xianb8 gets laid off & replaced by new TFA tchrs? This is NOT acceptable. Not at all. http://t.co/Vgyon7xfJM

Massive lay-offs are happening in Chicago. Here’s an excerpt from the Chicago Sun Times:

“The school day for students got more than 20 percent longer and yet now we see massive layoffs in the staff that’s supposed to be delivering the educational content that makes that school day better. I don’t see the point of making the school day 20 percent longer and then laying off all the art music, physical education teachers that were supposed to fill the day up with education,” he said. “This is the starving of public schools through insufficient revenue and when the district first said they would be closing 50 public schools in order to save money, I think that was about the right answer…What it means is we’re offering a more and more meagre and a poorer education.”

…Some of the teachers could be replaced by Teach For America recruits, as the district has committed to more than doubling its investment in the TFA program that trains college graduates for five weeks then sends them into schools for two years at a time. The Board of Education voted to increase its payment to TFA from $600,000 to nearly $1.6 million, and to add up to 325 new TFA recruits to CPS classrooms, in addition to 270 second year “teacher interns”.

TFA spokeswoman Becky O’Neill said about 200 of the new recruits are destined for charters, the rest to interview for openings in neighborhood schools.

“We’re looking forward to getting more information and better understanding how all of this impacts the schools and principals with whom we partner,” she said.

Sharkey denounced CPS’ TFA placements “at the same time it’s laying off veterans. This is an organization who started out saying their mission was to serve underserved children with a teachers shortage. There’s no longer a teacher shortage.”

You might also be interested in The Best Resources On The Chicago Teachers’ Strike and The Best Posts & Articles Raising Concerns About Teach For America.

Mixed Feelings About “Turnaround For Children”

A Report On EdSource Symposium On California Ed, Including What I Said About State Assessments

Leaving “No Child Left Behind” Behind