I’ve previously posted about polling wizard Nate Silver’s interest in education (see A Few Points About Education From Nate Silver’s “The Signal And The Noise” (Plus A Video) ).

He’s been in the news this week as he makes the switch from The New York Times to ESPN. Read what Politico has to say about today about his future:

Nate will appear on the air on ESPN and ABC, and will get “verticals,” or web hubs, devoted to a variety of new topics. He’s very interested in education, so there’s been a lot of conversation about that

This will certainly be interesting…. 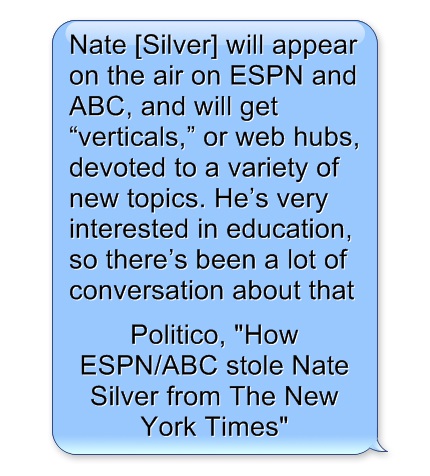 NOT Waiting For Superman

Nice PBS Interview With “Teacher Of The Year”