Slow Ideas: Some innovations spread fast. How do you speed the ones that don’t? is the title of Atul Gawande’s new article in The New York, which is thankfully not behind a paywall.

During my nineteen year career as a community organizer, we described organizing as just an other word for relationship-building.

And Gawande’s article is a great explanation about how, in most situations, change happens through those one-on-one relationships.

Here are a few excerpts:

But technology and incentive programs are not enough. “Diffusion is essentially a social process through which people talking to people spread an innovation,” wrote Everett Rogers, the great scholar of how new ideas are communicated and spread. Mass media can introduce a new idea to people. But, Rogers showed, people follow the lead of other people they know and trust when they decide whether to take it up. Every change requires effort, and the decision to make that effort is a social process.

This is something that salespeople understand well. I once asked a pharmaceutical rep how he persuaded doctors—who are notoriously stubborn—to adopt a new medicine. Evidence is not remotely enough, he said, however strong a case you may have. You must also apply “the rule of seven touches.” Personally “touch” the doctors seven times, and they will come to know you; if they know you, they might trust you; and, if they trust you, they will change. That’s why he stocked doctors’ closets with free drug samples in person. Then he could poke his head around the corner and ask, “So how did your daughter Debbie’s soccer game go?” Eventually, this can become “Have you seen this study on our new drug? How about giving it a try?” As the rep had recognized, human interaction is the key force in overcoming resistance and speeding change.

Later in the article, he describes the successful work of having mentors trying to make veteran nurses in an Indian hospital change their practice:

“Why did you listen to her?” I asked. “She had only a fraction of your experience.”

In the beginning, she didn’t, the nurse admitted. “The first day she came, I felt the workload on my head was increasing.” From the second time, however, the nurse began feeling better about the visits. She even began looking forward to them.

All the nurse could think to say was “She was nice.”

That, I think, was the answer.

I’m adding this post to The Best Posts & Articles On Building Influence & Creating Change. You might also be interested in The Best Sites To Learn About Saul Alinsky. 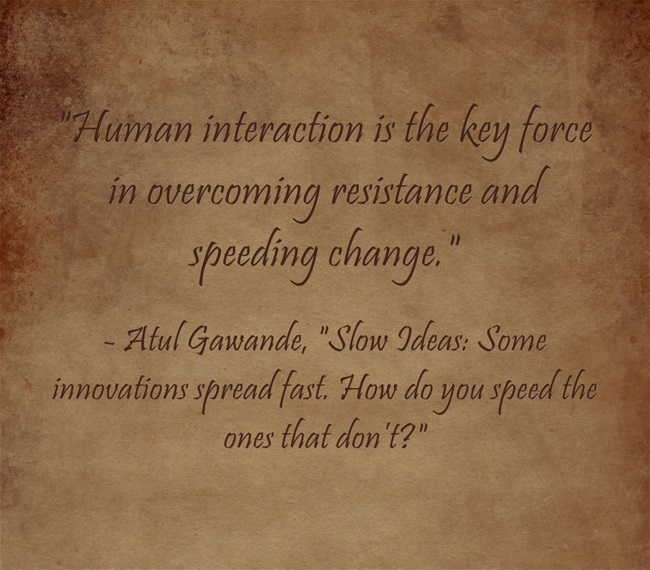 Exchange That Highlights What’s Going On In Wisconsin