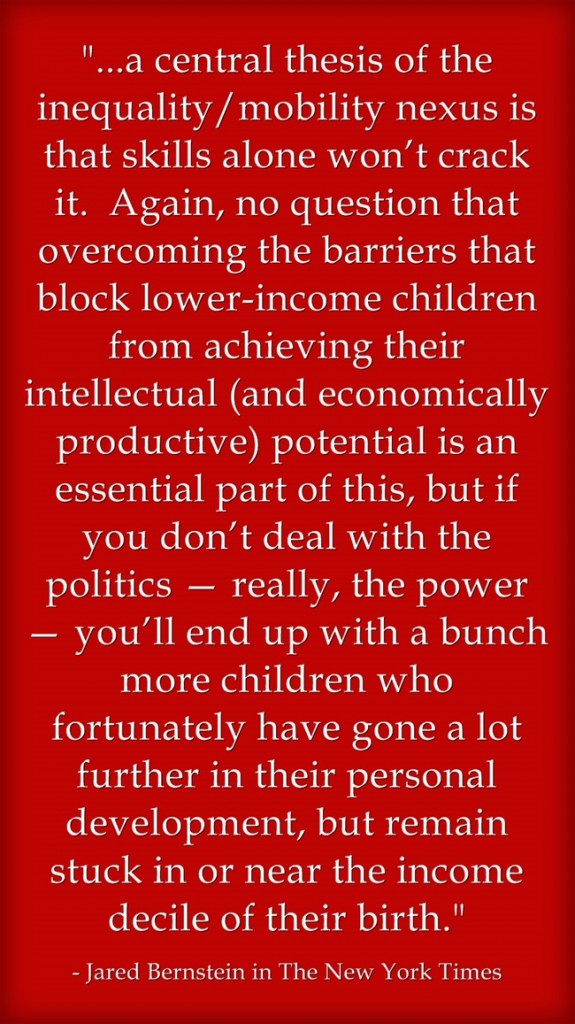 That’s a quote from a very insightful piece in The New York Times today titled Inequality, Mobility and the Policy Agenda They Imply.

Better schools and better education are important, but it’s not going to be enough for many of our students.

Here are some of my previous posts on the topic, and I hope readers will contribute additional resources:

Quote Of The Day: “Sympathy for the Luddites”

Education as the Great Equalizer: “More Myth than Reality” is by Paul Thomas.

Quote Of The Day: “Status & Stress”

Without Jobs, School Is a Waste of Time is from Recess. Despite its exaggerated headline, I’m adding it to this list.

One Cheer for Schools on Inequality is from Ed Week.

Quote Of The Day: Education Will Not End Poverty

The real secret to Asian-American success was not education is an important piece from The Washington Post. Here’s a key excerpt:

The picture became much clearer when he compared people with similar levels of education. Hilger’s finds that in the 1940s, Asian men were paid less than white men with the same amount of schooling. But by the 1980s, that gap had mostly disappeared.

In 1980, for instance, even Asian high school dropouts were earning about as much as whites, and vastly more than blacks. This dramatic shift had nothing to do with Asians accruing more education. Instead, Hilger points to the slow dismantling of discriminatory institutions after World War II, and the softening of racist prejudices. That’s the same the explanation advanced by economists Harriet Orcutt Duleep and Seth Sanders, who find that in second half of the 20th century, Asian-Americans not only started to work in more lucrative industries, but also started to get paid more for the same kind of work.

In other words, the remarkable upward mobility of California-born Asians wasn’t about superior schooling (not yet, anyway). It was the result of Asians finally receiving better opportunities — finally earning equal pay for equal skills and equal work.

Why couldn’t African-Americans close the wage gap? It’s hard to say. Hilger finds some evidence that there were underlying differences in skill. Between Asians and African-Americans with the same amount of schooling, African-Americans tended to achieve lower scores on military enlistment tests during the 1940s.

But it’s also likely that postwar racial attitudes shifted differently for Asians than for African-Americans.

Education Isn’t the Key to a Good Income is by Rachel Cohen. She also posted a follow-up to it.

If there’s one upshot we need to learn from all of the studies on inequality and mobility right now, it’s that educational opportunity alone isn’t going to get us there. Policing reform, wealth, taxation, and urban investment have to be a part of the constellation as well. https://t.co/qE4aURnyY1

Can Policy Interventions Reduce Inequality? Looking Beyond Test Scores for Evidence is from The William Grant Foundation.

Study shows education is not enough to overcome inequality is from Science Daily.

“African Americans have made considerable gains in HS and college completion over the last 4.5 decades—both in absolute terms & relative to whites—but those gains have had virtually no effect on equalizing employment outcomes between Black & white workers” https://t.co/ns6XYLDbB6

If You Think Republicans Are Overplaying Schools, You Aren’t Paying Attention appeared in The NY Times.

The Best Resources On Class Instruction In 2016 – Part Two

“The Best Posts On The inBloom Data Fiasco”