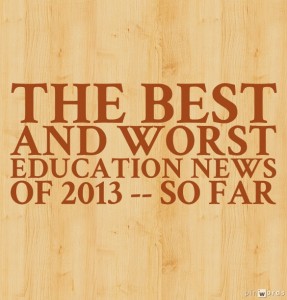 As usual, I don’t presume to say it’s all-encompassing, so I hope you’ll take time to share your own choices in the comment section. I’ll list the ones I think are the best first, followed by the worst. It’s too hard to rank them within those categories, so I’m not listing them in any order.

* The successful boycott of the unnecessary MAP standardized test by teachers at Garfield High School in Seattle that spread to six other local schools and inspired educators everywhere.  Teachers who participated in the boycott were not disciplined (as had been threatened) and using the MAP tests have now been made optional.  Garfield teachers’ strategy of organizing a united front of teachers, parents and students demonstrated that collective action can have a major impact on education policy that affects our classrooms.

* Passage and approval of California Governor Jerry Brown’s new funding formula that not only increases school funding across the board, but provides more monies to districts with higher numbers of low-income students.  We can only hope that it will be a model for other states to follow.

* The deaths of children (and adults) as a result of the terrifying Oklahoma tornado will never be considered anything but awful news.  But the heroic response of local educators risking their own lives to save their students is another reminder that teachers do put the interests of children ahead of their own.

* Two new exciting books, authored by some of the best minds in education policy, were published: Reign of Error: The Hoax of the Privatization Movement and the Danger to America’s Public Schools by Diane Ravitch and Teacherpreneurs: Innovative Teachers Who Lead But Don’t Leave by Barnett Berry, Ann Byrd and Alan Wieder. These “must-reads” are follow-ups to their previous exceptional books.

* More and more research was published supporting the view that, yes, our students need good schools, but if we’re truly serious about providing them with genuine opportunities,  what really needs to happen are major economic and political changes.  I suspect quite a few of us are tired of hearing the refrain of “No Excuses” when we point out this reality.

* And more and more research was published pointing out that, you know, schools in the United States are generally doing pretty well, though you wouldn’t know that by a lot of public rhetoric.

* Charlotte Danielson is the guru for many districts that are initiating new teacher evaluation programs.  Arthur Goldstein discovered a video of her declaring that standardized test scores should not be used in those teacher evaluations.  I wonder if district administrators are listening?  And, speaking of test scores and their validity in determining teacher quality, an important study determined that teacher success in helping students’ develop non-cognitive skills (an area of high-interest these days) had no relation to their Value Added Measurement (VAM) score.

* In his annual appearance on this list, Harvard professor Roland Fryer failed once again to prove that extrinsic motivation increased student achievement.  One of this year’s failed experiments was giving students cellphones and sending them daily “inspirational” text messages.  It didn’t work, but it did receive an advertising award.

* The North Carolina legislature went off the deep end in a number of areas, including eliminating teacher tenure and pay raises.

* Sadness, on a number of levels, in seeing the indictments of 34 Atlanta educators, including its former Superintendent, as a result of the test-cheating scandal there.

* Two surveys found what many of us knew already — that teacher morale is plummeting in the face of “school reform.”

* Bill Gates’ PBS-televised TED Talk where he announced that billions of dollars should be spent videotaping all teachers.  Almost simultaneously, the teacher he showed a video of in his talk said she disagreed with him.  And, even though his foundation announced at the same time they want to  start listening to teachers more, there was no chorus of “preach on, Bill!” from educators across the U.S.

Again, feel free to point out what I’ve missed!

The Best Resources For Learning About What’s Happening In Syria

The Best Sites To Teach ELL’s About Libraries