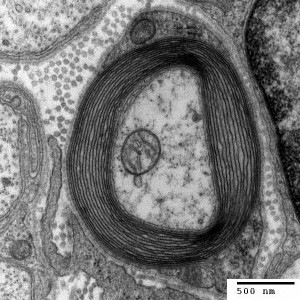 I’ve written a lot about helping students see the physical impact learning new things has on the brain. Now, after reading The Talent Code (I’ll be posting an interview with the author in my Education Week Teacher blog), I have a new wrinkle I can share — the impact that deliberate practice has on the brain — its creation of myelin.

I’ll try to explain it, though if you think I might have something wrong, please let me know….

Myelin is white matter in the brain that forms layers that make nerve impulses faster and stronger (see the image at the top if this post), and which a number of researchers suggest increases learning. The amount of myelin and its density seems to increase through practice and makes what you are learning to do more automatic. The idea of deliberate practice comes in because we have to ensure that myelin forms to increase and strengthen the right impulses — if we keep on practicing something the wrong way, then we’ll make the wrong actions automatic. In ESL, this problem is referred to as a fossilized error. Deliberate practice means continuous reflection to see if what we are doing is correct.

Explaining to students what a number of researchers think that deliberate practice does to the brain can build on the other lessons I’m already teacher about the brain and learning.

Here are some other resources on myelin and its role in learning:

White Matter is an article from Scientific American.

The Myelin in All of Us is by David Shenk.

The Science of Practice: What Happens When You Learn a New Skill by Jason Shen.

Daniel Coyle, the author of The Talent Code, has an interactive on myelin.

Here’s an ABC News segment on Coyle’s book. It talks about myelin specifically at about the four minute mark:

I’ll Be Co-Hosting A Combined #engchat & #sschat Next Monday