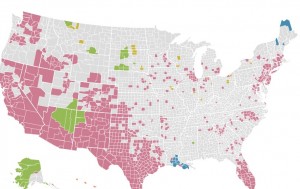 Here are new additions to The Best “Language Maps”:

The U.S. Census Bureau today released an interactive, online map pinpointing the wide array of languages spoken in homes across the nation, along with a detailed report on rates of English proficiency and the growing number of speakers of other languages.

“Will we succeed? The science of self-motivation”