Obviously, I’m a big supporter of helping students develop intrinsic motivation and a great capacity for self-control and “grit.” In fact, I’ve written two books on how educators can do just that….

However, it’s not enough.

In other words, poor self-control doesn’t cause poverty — it’s the other way around.

Unfortunately, the research that I cited in that post — though thorough — was not very accessible and did not gain a lot of public attention.

Today, however, the results of a brand new study were announced reinforcing those findings were announced, and has received a lot of media attention:

In a series of experiments run by researchers at Princeton, Harvard, and the University of Warwick, low-income people who were primed to think about financial problems performed poorly on a series of cognition tests, saddled with a mental load that was the equivalent of losing an entire night’s sleep. Put another way, the condition of poverty imposed a mental burden akin to losing 13 IQ points, or comparable to the cognitive difference that’s been observed between chronic alcoholics and normal adults.

The finding further undercuts the theory that poor people, through inherent weakness, are responsible for their own poverty – or that they ought to be able to lift themselves out of it with enough effort. This research suggests that the reality of poverty actually makes it harder to execute fundamental life skills. Being poor means, as the authors write, “coping with not just a shortfall of money, but also with a concurrent shortfall of cognitive resources.”

….The limited [cognitive] bandwidth created by poverty directly impacts the cognitive control and fluid intelligence that we need for all kinds of everyday tasks.

Poor Choices: Financial Worries Can Impair One’s Ability to Make Sound Decisions is from Scientific American on the same research. Here’s an excerpt:

These new results also support other research on an overlapping area of study—an emerging field called self-control, says Kathleen Vohs, a consumer behavior expert at the University of Minnesota who published an accompanying commentary piece on the findings in the same issue of Science.* Self-control studies look at the finite ability of individuals to overcome urges and make decisions. They posit, in a similar vein, that when individuals are faced with many decisions that demand trade-offs—such as a scarcity of food, time or money—and do not have a chance to recover from the resulting brain drain, self-control can tank. That depletion, in turn, could lead to decision-making patterns that impede one’s ability to improve their lot in life, she says. “Because the poor must overcome more urges and make difficult decisions more often than others, they are more likely to overeat, overspend and enact other problematic behaviors,” she wrote.

Poor Concentration: Poverty Reduces Brainpower Needed for Navigating Other Areas of Life is a similar piece from Science Daily.

This research, and the earlier study,  makes sense to me, but certainly doesn’t negate the importance of doing whatever we can to support our students to develop these traits (though let’s not grade them, please).

But it does reemphasize the value of teachers, schools and families working together to push for the public policy changes in jobs, housing, childcare, etc.  to attack the root causes of the challenges faced by our students…. 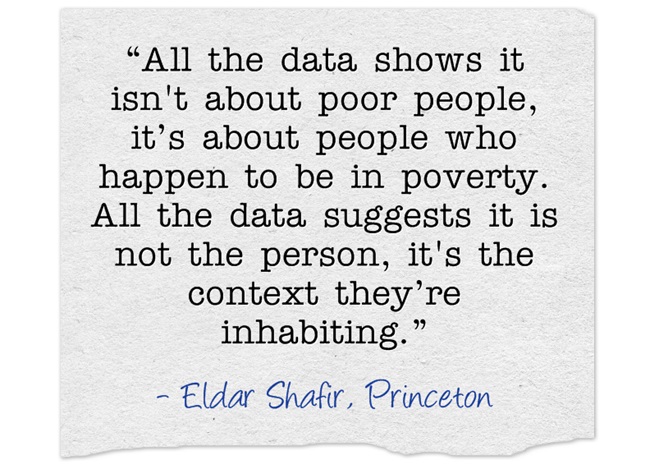 In Education, If It Sounds Too Good To Be True, It Probably Is….