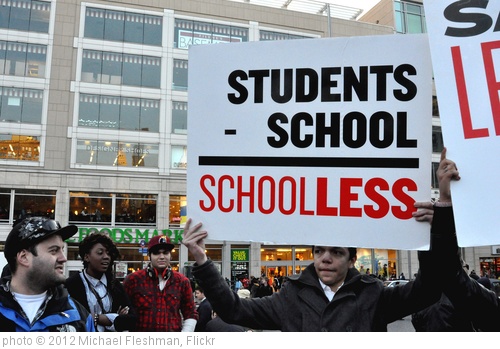 Here are some recent good posts on education policy issues:

Five bad education assumptions the media keeps recycling is by Alfie Kohn, and is a response to a NY Times review of Amanda Ripley’s new book. Though I haven’t read her book, I’ve certainly had issues with articles she’s written about school issues.

E.D. Hirsch, Jr. comes out against Value Added Assessment for teachers, at least for those who teach language arts. I’m adding this to The Best Resources For Learning About The “Value-Added” Approach Towards Teacher Evaluation.

Check out Empathy is What Education Looks Like at the Metapedagogy blog.

Tenure crunch continues, but just 41 teachers denied on first try is from Gotham Schools, and the last two paragraphs are of particular note:

UFT President Michael Mulgrew, who has said the teachers union supports “a rigorous but fair” system for awarding tenure, said the new data mask the reality that the city loses many teachers well before they come up for tenure, a reality that he blamed on the Bloomberg administration’s emphasis on test scores.

The department’s “self-congratulatory announcement ignores a more important issue,” Mulgrew said. “In the teeth of the worst recession in decades, more than one-third of the over 6,800 teachers hired in 2006-2007 left New York City public schools of their own accord.”

The Condensed Classroom is from The Atlantic. I’m adding it to The Best Posts On The “Flipped Classroom” Idea.

New Research Shows Why Sacramento School Benefits From Statewide ‘QEIA’ Reforms is a new report on how students in California schools have benefited from the millions in extra QEIA funds gained by the California Teachers Association. Our school is one of them.

What We Know Now (and How It Doesn’t Matter) is an excellent post by P.L. Thomas.

“What Would a President Romney Do on K-12?” — Not A Real Pretty Picture

“Tape and Analysis to Produce Growth, not a Score”