The Best Resources For Learning About The Birmingham Church Bombing 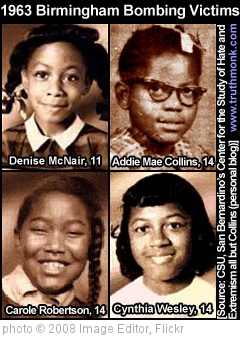 Fifty years ago today four African-American girls were killed when their church was bombed in Birmingham, Alabama.

I thought readers would find it helpful to have a short list of related resources.

You can find all my “Best” lists connected to the Civil Rights Movement here.

Most of these links have many multimedia resources:

Siblings of the bombing: Remembering Birmingham church blast 50 years on is from CNN.

50 Years After The Bombing, Birmingham Still Subtly Divided is from NPR.

The Speech That Shocked Birmingham the Day After the Church Bombing is from The Atlantic.

50 Years Later: The Sixteenth Street Baptist Church Bombing is from The Daily Beast.

Learning the pivotal moments in America’s civil rights struggle is from The Washington Post.

On the anniversary of the terrorist bombing of the 16th Street Baptist Church in Birmingham that killed four young girls, I’m going to repost this must-listen: https://t.co/Yg6KCy0HDZ

‘Fifth Girl’ in 1963 Church Bombing Gets an Apology From Alabama’s Governor https://t.co/DOn8OowEAt

Sarah Collins Rudolph, #Birmingham Church Bombing survivor and co-author of “The 5th Little Girl: Soul Survivor of the 16th Street Baptist Church Bombing,” tells @JoyAnnReid what happened that day 58 years ago today, and how it has impacted her life. #TheReidOut #reiders pic.twitter.com/LBWbwryEsK

As we mourn the passing of Maxine McNair, we remember those four girls taken in the horrific bombing 58 years ago. Their memories are a reminder of our work in the battle for the soul of this nation. We must continue to root out racism and stand up to hate wherever it’s found. https://t.co/6bhXFUcCAJ

“Poverty and Race in America, Then and Now” Is A Useful Mapping Site

Additions To “The Best…” List on World’s Tallest Buildings